When you go camping, one of the things you need to think about is the type of groundsheet you’re going to use. In the scheme of things, sewn in groundsheets are a pretty recent development and there are pros and cons to using them. 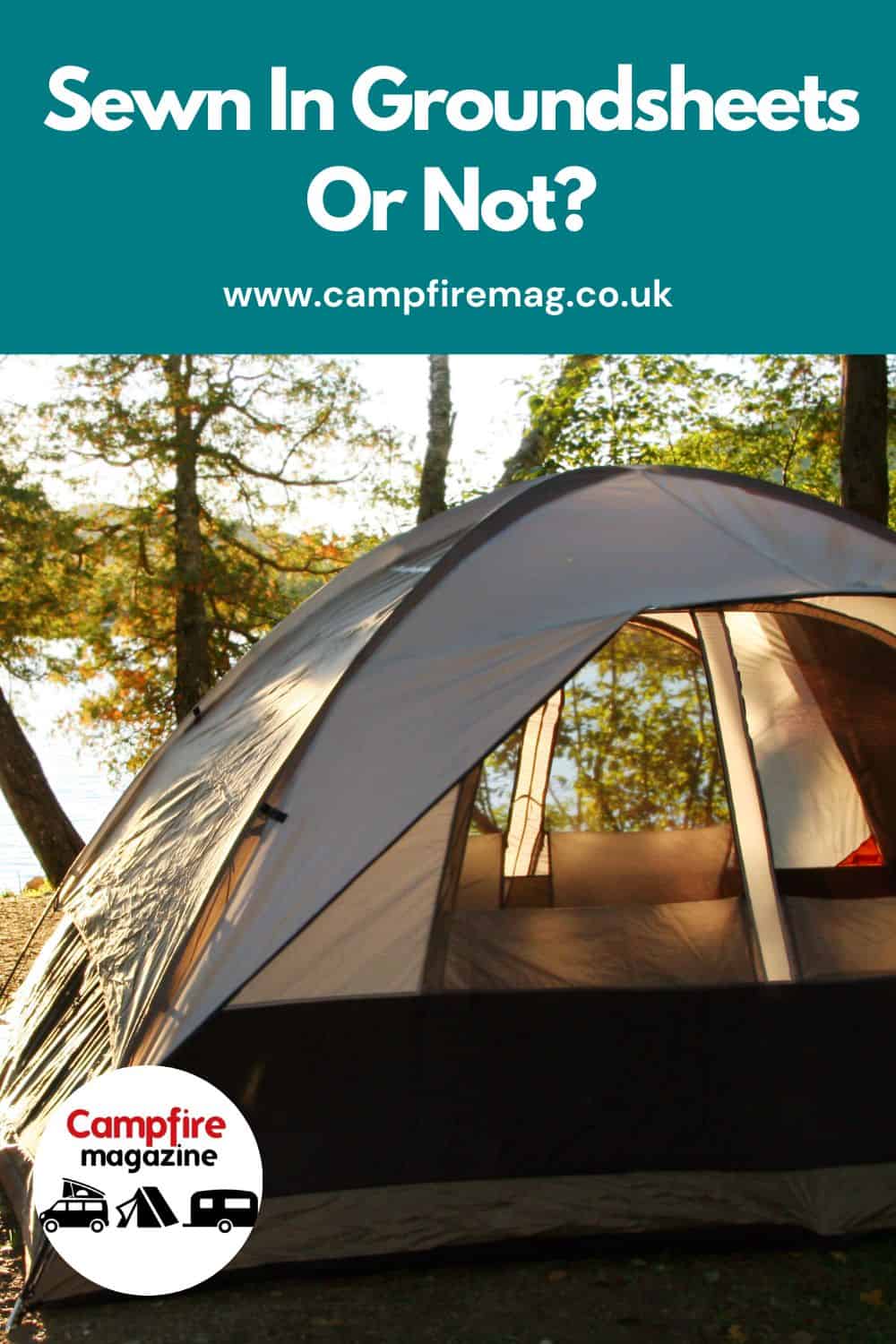 There are some campers that swear by using a tent with a sewn in groundsheet while others are averse to the idea. Much of it comes down to personal choice but if you’re new to the concept, it’s worth educating yourself on the pros and cons.

In this short guide, we will discuss whether it’s worth getting a tent with a sewn in groundsheet or whether you should go with a more traditional design.

What Is A Groundsheet?

With a lot of tents, you have the roof and the wall but nothing in the way of a floor. Instead, this is installed separately in the form of a groundsheet.

A groundsheet is a thick layer of waterproof material, often something like PVC which covers the ground under the tent and protects you from moisture.

In a traditional tent, the groundsheet would have been a separate component to the flysheet. The only real exception to this was in the sleeping quarters where a built in groundsheet has always been a common feature.

The great thing about having a separate groundsheet was the ability to take it up during the day which allowed the grass to breathe. As you can imagine, covering the grass over for long periods of time will only damage it, and potentially kill it entirely.

What Is A Sewn In Groundsheet?

In modern tents, you may find a sewn in groundsheet, which is known in the camping world as a SIG. These are welded to the flysheet creating a seamless design that a lot of today’s campers prefer. The main benefit of this design is improved waterproofing. After all, the last thing anyone wants is a leak in their tent, especially when the UK weather is so unpredictable.

There are also tents that have a zipped groundsheet which can be removed. This is somewhere between the traditional and modern design but we will look at this in a little more detail later on.

Are Sewn In Groundsheets Good?

If you’re asking us whether a sewn in groundsheet offers good protection then the simple answer is yes. These tents are as good as impenetrable for ground water, rain and other moisture so you’ll have a beautifully dry tent interior that’s super comfortable.

What’s more, if you are camping in chilly or windy weather then the welded seams mean that no draughts can get in.

Another reason that a lot of people like a tent with a sewn in groundsheet is that the design generally makes the tent a lot easier to pitch. This means that you can simply arrive at the campsite, erect the tent and spend more time enjoying your holiday than messing around with a fiddly tent.

A lot of people love a sewn in groundsheet because it does an excellent job of keeping critters and insects out of the tent. If you don’t want any miniature lodgers in your camping accommodation then it’s well worth considering an SIG.

What Are The Downsides Of Sewn In Groundsheets?

While a sewn in groundsheet certainly has its advantages, there are a few things you might want to consider before you make a decision.

For starters, you will find that a lot of campsite owners don’t like the idea of the sewn in groundsheet because it’s not as healthy for the grass. You cannot simply lift it up in the same way that you can with a traditional groundsheet. If you’re camping for a long period of time, let’s say a couple of weeks then the grass will suffer.

What’s more, after a long camping trip, the base of the sewn in groundsheet is going to be mucky and you’re going to need to clean this. Since it is attached to the rest of the tent, cleaning and maintenance won’t be as easy. What’s more, if you’ve got a lot of furniture inside the tent then you’ll need to be really careful not to drag this or catch it on the groundsheet otherwise you might end up with a hole.

If you are doing anything that involves water inside the tent such as drying clothes or cooking then you’ll have to be mindful not to get water on the floor. You won’t be able to simply lift the sheet to let it drain off so again, keeping things clean and dry won’t be as easy.

Another thing that a lot of campers complain about when using a sewn in groundsheet is that the ventilation in the tent is nowhere near as good. Now yes, we know that almost every good tent will have other ventilation features but when you’re camping in hot weather, it helps if there’s a nice breeze coming up from the bottom of the tent walls.

Since the sewn in groundsheet is completely sealed, there is no chance of any ventilation from this part of the tent. In some cases, it can make the inside of the tent feel pretty stuffy and uncomfortable.

Should I Have A Sewn In Groundsheet Or Not?

Whether or not you choose a sewn in groundsheet vastly depends on your personal preferences. Some people love them and other people wouldn’t go near them in a million years.

It really does help to consider the time of year that you’ll be camping and what the weather is expected to do.

If you’re camping in the height of summer when it will be largely dry, a sewn in groundsheet might not be necessary for water protection. Moreover, you’ll benefit from improved ventilation in hot weather if you avoid using one.

However, if you’re camping in cooler, wetter weather then a sewn in groundsheet could be a real lifesaver.

Also think about the length of time you are camping. If you’re only going for a few days and love the idea of the SIG then you aren’t likely to do much damage to the grass. But if you’re off on a fortnight’s camping trip then you might want to do your bit for nature and use a separate groundsheet to protect the grass.

What About A Linked In or Zipped In Groundsheet?

Now, if you want something that falls between the traditional and modern then you might opt for a linked or zipped in groundsheet. The great thing about these is that you have a better degree of protection than you would with a separate groundsheet but you also have the option to remove it, which isn’t the case with the SIG.

These are a brilliant option for people that are using cooking equipment like a wood burning stove inside the tent. You can lift them up to avoid damage and when it comes to cleaning, it’s nowhere near as complicated.

On the flip side, you have to consider that the level of protection you’ll get from a zipped in design is nothing compared to an SIG. They’re OK in mild weather but if there’s heavy rain or snow then you’ll find the tent leaks. That is unless you have a bathtub floor.

Moreover, the zipper of these groundsheets will add weight to your gear. Alright, it’s not kilos and kilos but if you’re hiking or backpacking then every pound makes a difference. Plus, if it were to get damaged while you’re out in the wilderness then it’ll be rendered useless.

Camping is very much a personal experience and what gear you choose to take will depend on your preference and where and when you’ll be camping.

Some people love the idea of a sewn in groundsheet which offers better moisture protection as well as keeping out bugs. But this design doesn’t offer the best ventilation which is certainly something worth considering.

There are other options including the separate groundsheet which promotes great airflow and can be lifted to give the grass a chance to breathe.

However, if you are really struggling to decide between the two then why not go for the zippered option which gives you the best of both worlds.