You've probably observed that many people use the phrases oar and paddle interchangeably, but they're not the same thing, and they're not used in the same sport. So, what's the difference between the two?

Oars are fastened to the boat when in use. Paddles, on the other hand, are not. So we’ve put together this helpful tutorial to help you comprehend both oars and paddles. We'll also go over the differences between rowing and paddling so you don't get confused the next time you get into a kayak, canoe, or boat. 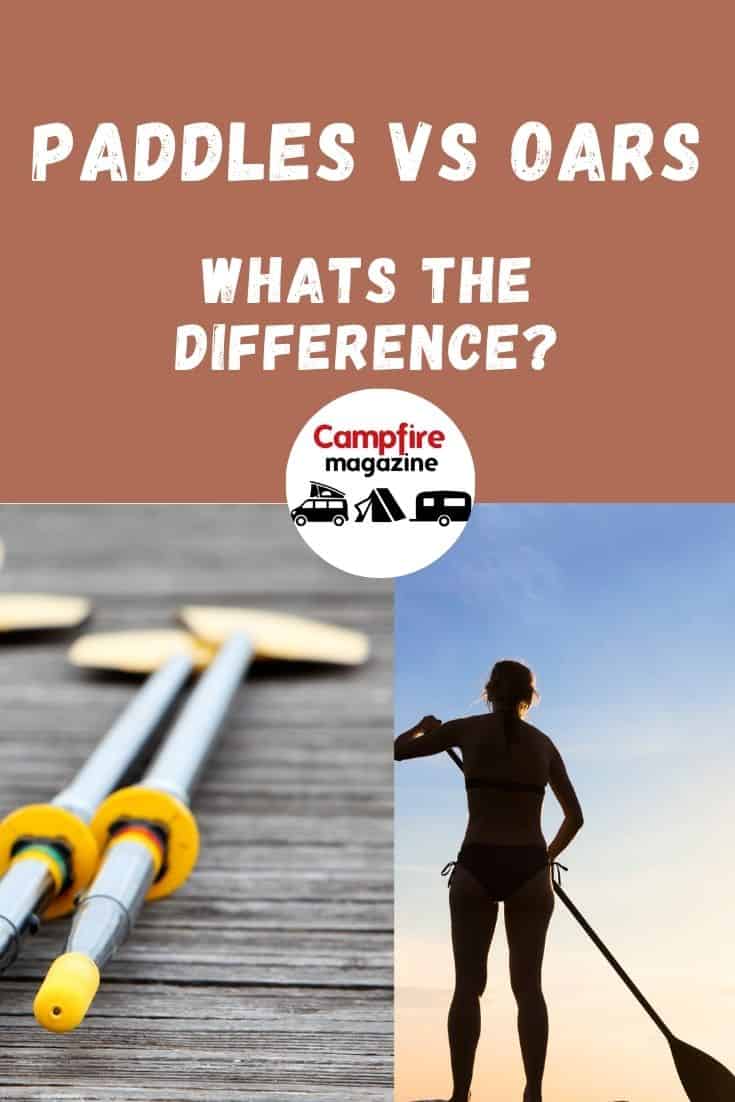 Table of Contents
1
What is An Oar?
Parts of An Oar
2
What is A Paddle?
3
Differences Between Paddling and Rowing
While the Oars are Attached, the Paddles are Free
Single Blade Steering
Different Craft Names
Strokes
What Vessel are They Used For?
What Materials are They Made Of?
Design and Appearance
Muscles Engaged
Where Are They Mounted?
Power Output
Price Range
4
Conclusion 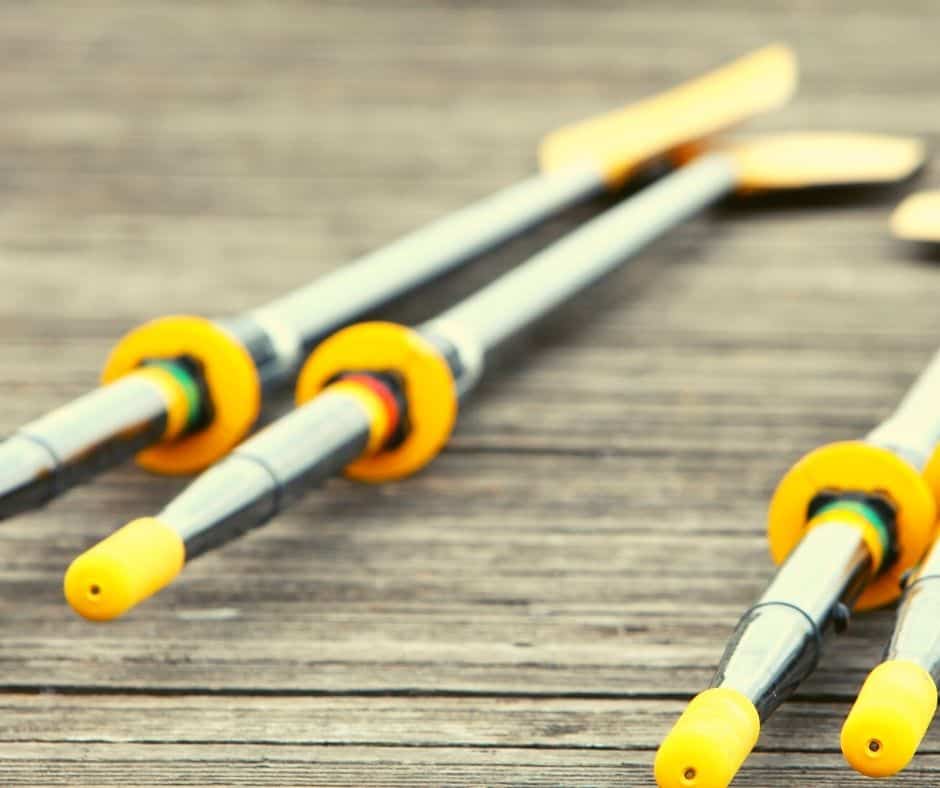 What is An Oar?

You and your craft are propelled across the water using oars. However, unlike a paddle, an oar is linked to the boat. The oarlock helps keep the oar from coming loose from the boat by sliding it into the oarlock.

Oars were employed to drive Viking ships in the 8th century and as far back as the Iron Age. They can be used on rowing boats or bigger sailing boats. It's even been suggested that the title "Vikings" could refer to oarsmen or "men rowing in shifts."

Parts of An Oar

What is A Paddle?

Unlike oars, you must have a firm grip on your paddle at all times, or secure it in a paddle holder when not in use, to prevent it from drifting away. Paddles can be used on rafts, SUPs, and inflatables, among other watercraft.

Differences Between Paddling and Rowing

Some people wrongly believe they are the same thing. Contrary to this belief, paddling and rowing have a number of distinctions. You don't row or paddle a kayak or a boat, after all.

There are parallels, to be sure. For example, they are both physically propelled through the sea. However, the parallels cease there. To help you, we've put together a list of our top tips for telling them apart -

While the Oars are Attached, the Paddles are Free

Rowers pull on oars that are locked in oarlocks. The paddles aren't fastened in place. Paddlers have complete control over the craft by moving them around freely.

Paddling has the advantage of allowing you to face your destination. You move ahead whether you're canoeing, kayaking, or stand-up paddleboarding. You won't miss that vital picnic place this way. Rowers, on the other hand, go through the water backwards.

With a single blade, you can keep your craft straight as a paddler. This allows you a lot of manoeuvrability. However, to keep a boat straight, rowers require two blades.

Craft names are one of the most visible contrasts between paddling and rowing. Paddleboards, canoes, and kayaks are all used by paddlers. Rowing boats, sculls, and sweep-oar boats are used by rowers.

As a paddler, you will primarily use your upper body and core to move through the water. A rower's stroke differs from that of a runner. Rowers will drive themselves through the water, mostly with their legs and arms.

What Vessel are They Used For?

Rowboats, sweep-oar boats, and sculls are all common uses for oars. The most prevalent are rowing boats, which are used for various purposes, including sports, fishing, and recreation.

Paddles are commonly used with kayaks and canoes, as they are the traditional way of sailing these vessels. The standup paddleboard is a different style of board.

What Materials are They Made Of?

Paddles for kayaks are often composed of fibreglass, aluminium, or carbon fibre. These materials keep the weight down, allowing you to paddle for longer periods of time.

Oars had traditionally been made of hardwood, but in professional rowing, carbon-fibre oars are now the most frequent.

If you've been paying attention, you'll notice that the design and appearance of the oar and paddle differ significantly. Because oars are single-bladed and attached to the sides of the boat through oarlocks, you can – and should – use two oars, one on each side.

Paddles, which come in single and double-bladed versions, provide a bit more versatility in this regard.

Canoes and rafts often utilise the former because it allows for quick turns and control, whereas kayakers prefer the latter because it is faster, more efficient, and less physically taxing.

Rowing strokes demand you to use your complete body, with the arm, back, and leg muscles receiving special attention. In sculls and sweep-oar boats, where the entire seat swings back and forth, the contrast between oar and paddle in terms of physical work is much more obvious.

You may increase the power of each oar stroke by using your leg muscles. On a stationary rowing machine, you can improve your rowing technique and target specific muscle regions, which isn't possible with paddling.

Where Are They Mounted?

An oarlock is used to secure the oars to the scull or rowboat. The oarlock is what keeps the oar firmly in position during rowing, as it should be. As you row your boat, it basically acts as a fulcrum.

Paddles, on the other hand, do not have any attachments. They rely totally on the paddler maintaining control of the craft while operating it. If you're paddling in particularly choppy water, you might want to consider using a paddle leash.

If you capsize or lose your grip, a paddle leash will ensure that you don't lose your paddle.

The strokes made by oars carry a lot more force than those made by paddles. This is why larger boats will be equipped with oars rather than paddles. Sweep-oar boats, sculls, rowboats, tiny rafts, and dinghies are examples of watercraft using oars.

Rafts, stand-up paddleboards, kayaks, canoes, and several other small boats are some of the watercraft that employ paddles.

Buying oars is often more expensive than purchasing paddles. Because you'll need two oars but just one paddle, this is the case.

It's also more expensive to make high-quality hardwood oars with metal oarlocks than it is to pour plastic into a mould for a typical paddle. Many people select kayaks and paddleboards as their first watercraft for this reason. They're easier to transport and purchase, and they're less expensive.

As you can see, even though paddles and oars are frequently confused, they are actually fairly different. They cannot be substituted for one another, and they are employed in many forms of watercraft.

So, before you go out on the water, decide whether you'll be using an oar or a paddle to drive your boat through the water.