He’s taken part in the Radio 4 Food Programme, written a book and a blog, and knows a thing or two about the joys of campfire cooking.

Here Matthew de Abaitua shares some words from his inspirational book, The Art of Camping: The History and Practice of Sleeping Under the Stars. 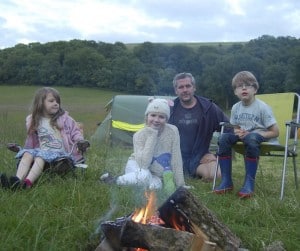 Table of Contents
1
What’s this camping lark all about?
2
Campfire kit
3
Relax and get into the camping groove
4
Why we love campfires

What’s this camping lark all about?

I camp with my wife Cath and our three children. For the two years I was writing and researching my book, we camped over a dozen times a year. 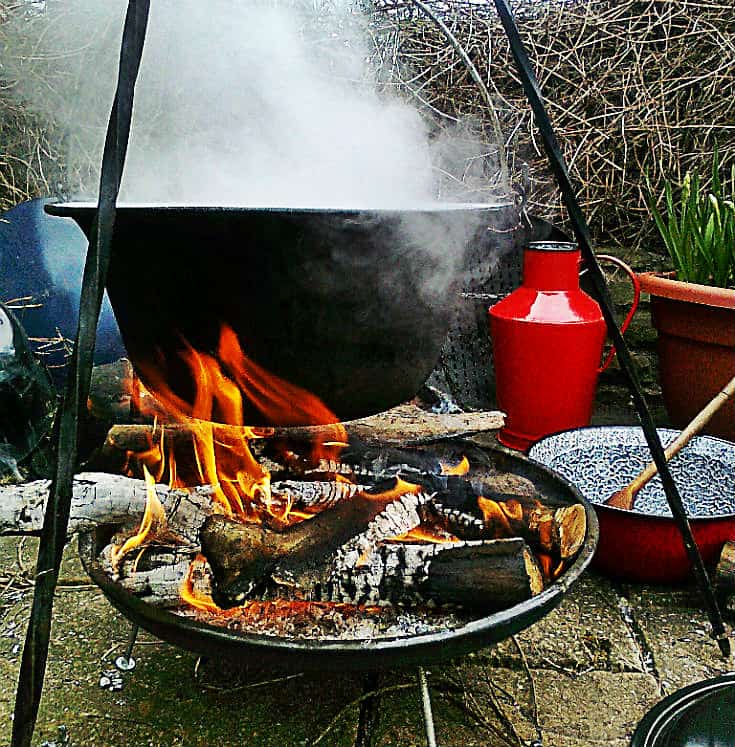 At this time, we lived in a rented house in a borrowed town. We were looking for somewhere to settle and every camp asked of the land: could we live here, is this where we belong?

Our children like camping. They like the unscheduled time and sense of discovery that comes with being outdoors. Watching my son as he toddled from flower to flower, in amazed pursuit of a bee, is one of my fondest camping memories. Camping teaches resilience, that they can go without stuff, but it also represents the kind of freedom to roam that I took for granted as a child.

We camp with a campfire, and we take turns to cook on it.

My camping kitchen includes a muurikka, a Finnish cooking skillet which is ideal for making bacon and pancakes, and a campfire tripod that’s large enough to suspend a large grill from, so I can use it for barbecuing as well as one-pot cooking.

Cath has developed a bunch of dishes for eating on arrival at the site, what she calls Just Pitched Dinners, which can be prepped before you leave. You don’t want to be cooking anything too ambitious on the first night.

Relax and get into the camping groove

I get up first in the morning, shake the dew from my boots, rouse the fire, secure fresh eggs and brew the tea. Hot tea in a tin mug, beside a river, with a fire smoking at my feet, is this not happiness?”

My campfire begins as a pyramid of kindling sticks around torn and loosely clenched strips of newspaper, set upon the flat side of a single log. Lumps of woodchip are placed against the tinder and they smoke noisily together.

Gently, on all fours, I lean in and blow a long kiss; the flickering, bickering spirits of the fire respond to my affections. Once all the wood is burning, I add some coals so the fire will burn evenly for longer, making it easier to cook on. 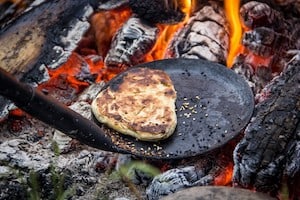 I set a grill upon some foraged bricks, brown a shoulder of lamb over the fire, then swaddle it in foil so that it cooks through.

Cooking over a campfire makes me fidgety, checking both meat and fire regularly but not – and this is crucial – interfering with them, as every prod and poke dissipates heat.

When the lamb is cooked, I set it aside to rest, then spread the burning coals across the fire pit, preparing to grill some breads. I explain all this to my children. But they’re not listening to me, they’re listening to the fire.

Why we love campfires 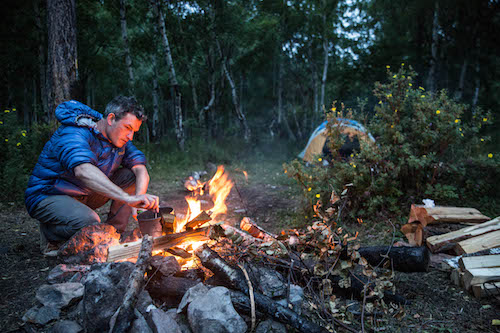 “We are the cooking apes, the creatures of the flame,” writes Richard Wrangham in Catching Fire: How Cooking Made Us Human. Wrangham suggests our evolutionary leap required the energy surplus provided by cooked food.

He cites numerous cases of people who have, throughout history, tried to live solely on raw food and failed. Our bodies have evolved to require hot dinners. Cooking fires burn at the heart of our humanity.

How ancient is our bond with the campfire? Clusters of burnt artefacts indicate campfires set somewhere between 790,000 and 690,000 years ago. Some archaeologists have proposed that man’s mastery of fire is as old as one and a half million years, taking as their evidence burnt bones found at the Swartkrans site in South Africa. Even apes can make fires.

The bonobo Kanzi was taught to communicate by pointing to symbols on a board; on a trip to the forest, Kanzi used these symbols to request twigs and marshmallows. He snapped the twigs into small pieces, lit them with matches and toasted the marshmallows.

A coalition of calm

Wrangham imagines how the campfire might have fostered tolerance.

“Among the eaters of cooked food who were attracted to a fireside meal, the calmer individuals would have more comfortably accepted others’ presence and would have been less likely to irritate their companions.” 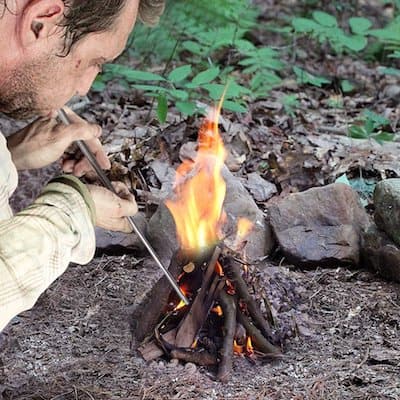 Campfires meant that our ancestors no longer had to sleep alone in the trees for protection and that they could sleep together on the ground.

Cooking around the campfire rewarded sociable individuals who “would have been chased away less often, would have had more access to cooked food, and would have passed on more genes to succeeding generations than the wild-eyed intemperate bullies who disturbed the peace to the point that they were ostracised by a coalition of the calm”.

I love that phrase – “the coalition of the calm”; it evokes the quiet wisdom of the group, the council of elders. They are the campers we are descended from.”

The Art of Camping: The History and Practice of Sleeping Under the Stars is published by Penguin.