Here’s our round-up of fast, light (and occasionally pretty) kettles for camping cuppas. 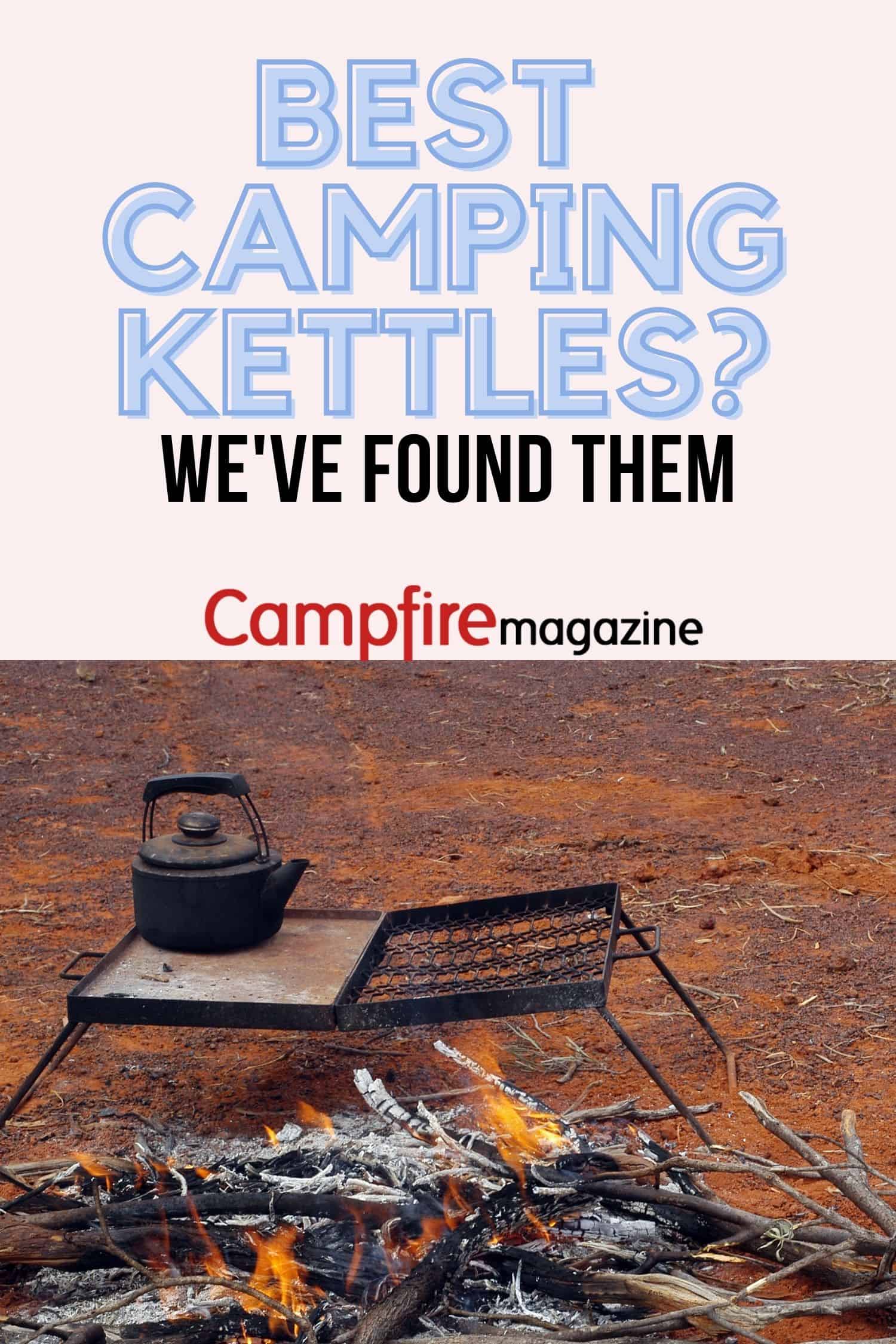 In a hurry? If you don’t have much time using the links below to quickly find our favourite kettles for you on Amazon and beyond. You can be assured we only choose the best products… 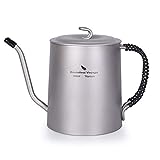 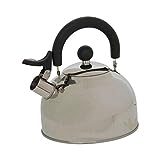 What’s the best camping kettle made of?

If you need lightness and cheapness, aluminium is the answer. Some people, though, prefer not to use aluminium for cooking (see the notes on cookware safety at the end)

For backpackers and wild campers, weight is an issue, so more expensive titanium kettles fit the bill. For most campers carrying their kit in a car, a stainless steel kettle is probably the best choice.

Whenever we look at camping gear, we often find the same product under different brands. Generally, this is because a couple of companies are having their kit made by the same (often Chinese) manufacturers. We’ve highlighted lookalikes here so that you can choose by price. 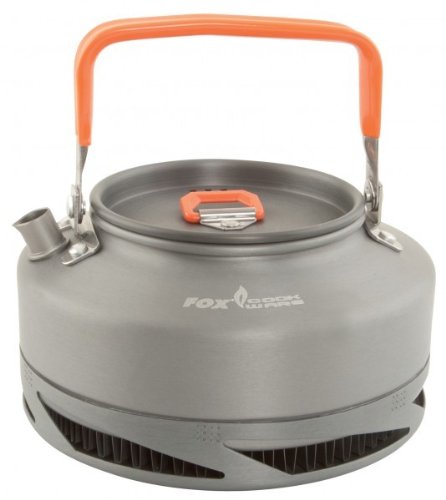 The Fox heat exchange kettle is great. The baffles at the base concentrate the gas for faster boiling. Comes in 0.9 or 1.5l 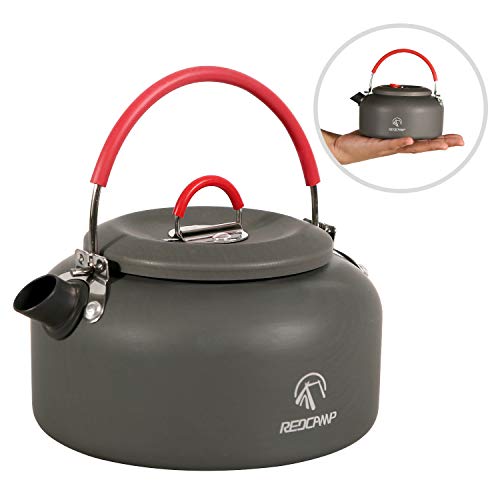 The Redcamp kettle holds 0.9l and has some nice features, including a more sensible lid than many and base designed to spread heat more evenly. 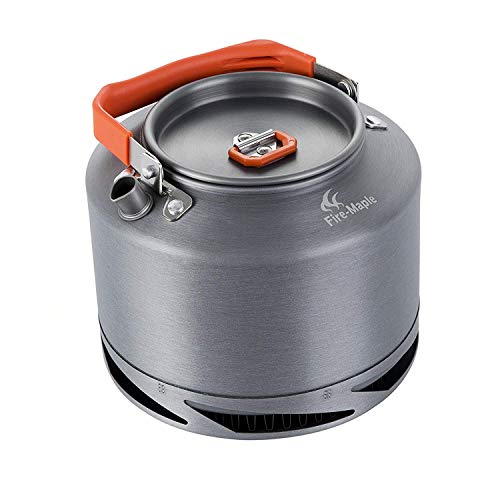 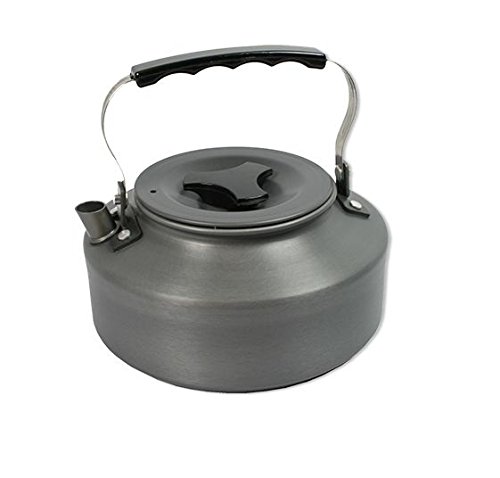 The NGT 1.1l kettle. Folding handle, nice lid-pull, anodised aluminium. 260g weight. The current title for it on Amazon amused me, it rightly claims to be a Unisex kettle, so there are no excuses now... 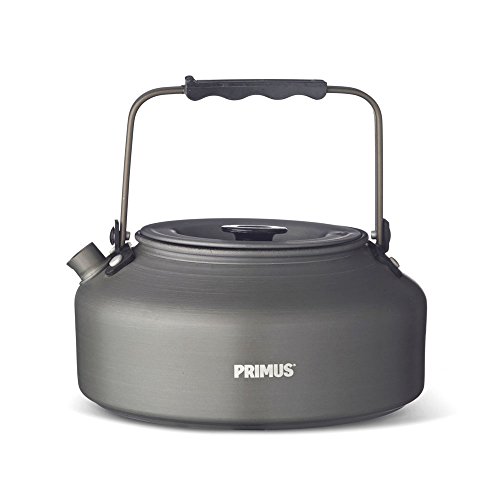 Heavier than aluminium or titanium, but strong, taste-free and affordable 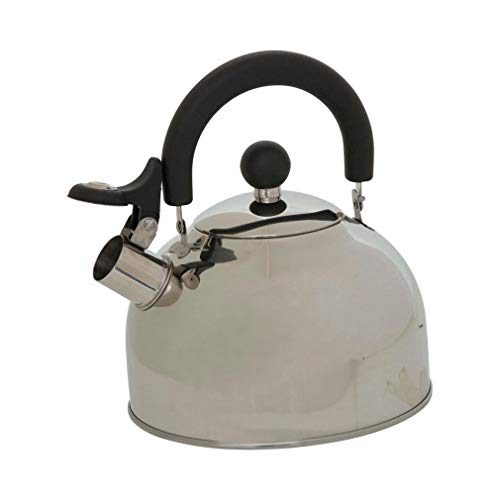 An old favourite, the Vango steel kettle has the best handle of all we’ve tested, and it folds. It has a whistle too (though it doesn’t always work). The spout cover saves steam and spills. A bit heavier and bulkier than the rest, but very inexpensive.

Add some colour to your life, the windbreaks come with a choice of five sizes, and have some fantastic reviews. 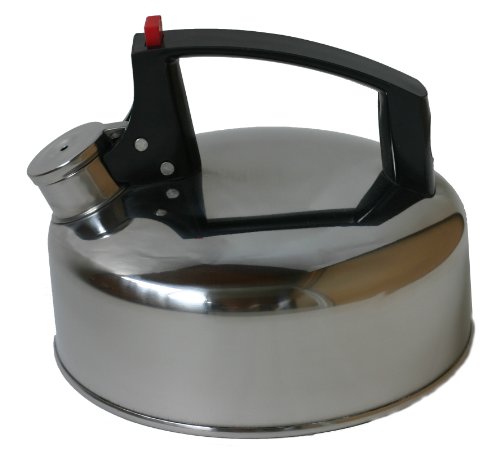 Cheap and whistling…and holds two litres. This Yellowstone camping kettle is almost retro. A solid and affordable option with the best handle. 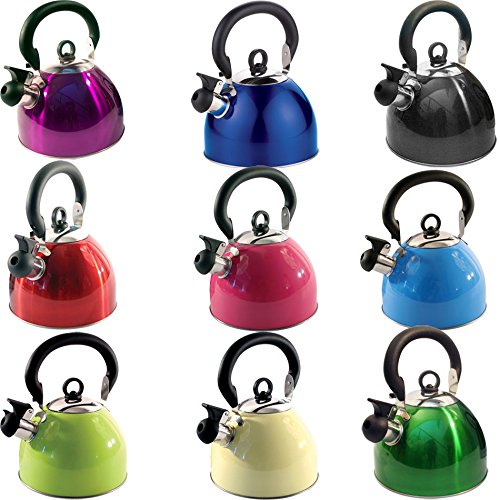 For a bit of colour and a bigger, 2.5-litre capacity, these bright whistling kettles can’t be beaten for the price. 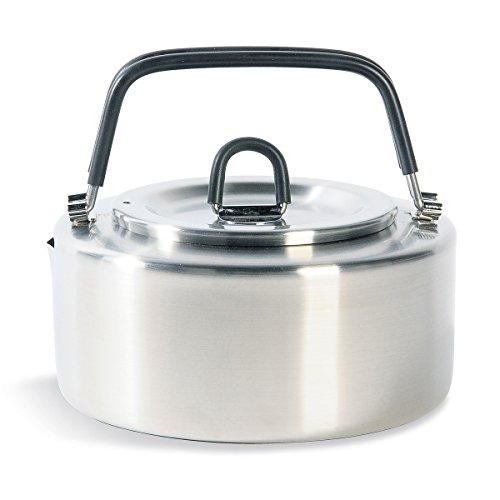 The beauty of this little Tatonka stainless steel camping kettle is the wide-opening at the top. You can actually fit a small Trangia-type stove in there. It holds a litre. 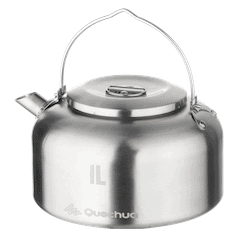 A simple kettle from Decathlon. The handle gets hot, so be careful, but it’s a neat little classic design. Holds a litre.

Extremely strong and lightweight and no metallic taste in your water. Expensive, though. 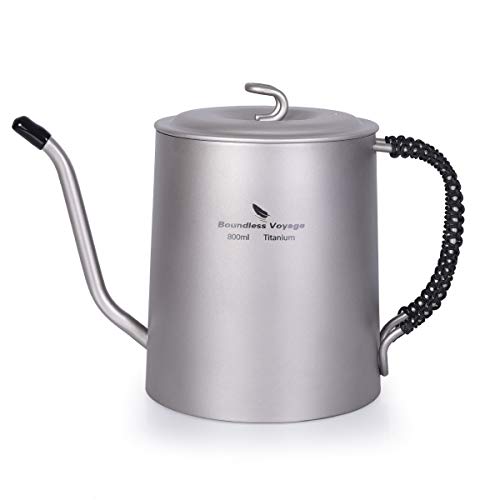 The Boundless Voyage titanium kettle has a gooseneck and comes in three options – with two cups, one cup or on its own. It’s a good size at 800ml. 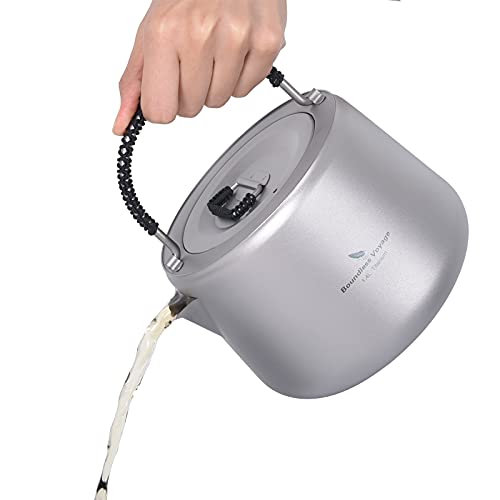 Another titanium kettle from iBasingo/Boundless. This one is a more usual kettle shape and holds 1.4 litres.

Just the right size for neatness and practicality. Weighs just 190g. Extremely fast to boil too. 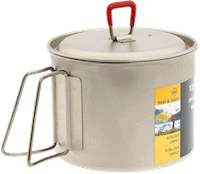 One for the backpackers and minimalists. People love MSR equipment and you can’t get much simpler and neater than this MSR kettle pot. 118g and holds just over 0.8l. There’s a two-litre version too.

Beware this 0.6l described-as-titanium  BRS kettle. It’s stainless steel in the header but in it's description it says Pure titanium,lightweigt,stronger than steel

We found a few claiming to be titanium, when they were way too cheap to be anything other than aluminium or steel. Titanium will always be more expensive, so don’t be fooled.

We haven’t yet found a folding/collapsible silicone kettle that we truly like. The water doesn’t take good out of most of these as they’re generally a mix of silicone, aluminium and sometimes other plastics. People seem to like the induction-ready yellow one below. It has a stainless steel base, which is an advantage. 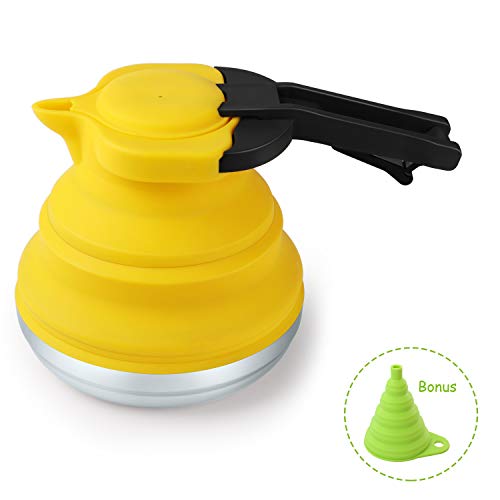 Not my cup of tea at all, but some readers have recommended this 1.2l folding silicone kettle to us. A stainless steel base means it can be used on induction hobs. Have a look at our article on camp cooking using electric hobs to see why this might be a good choice. 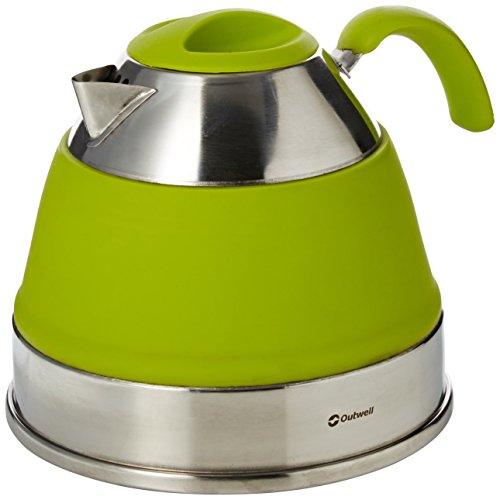 The Outwell Collaps kettle. Comes in a couple of colours. Silicone and stainless steel. We’ve heard the silicone can detach from the steel if you’re not careful! Choose from 1.5l or 2.5l. 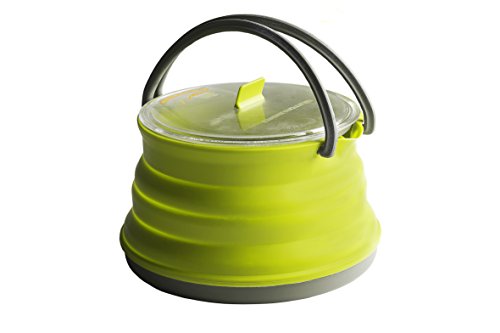 A 1.3l folding kettle by Sea to Summit. Very neat. Has an aluminium base for fast heating. 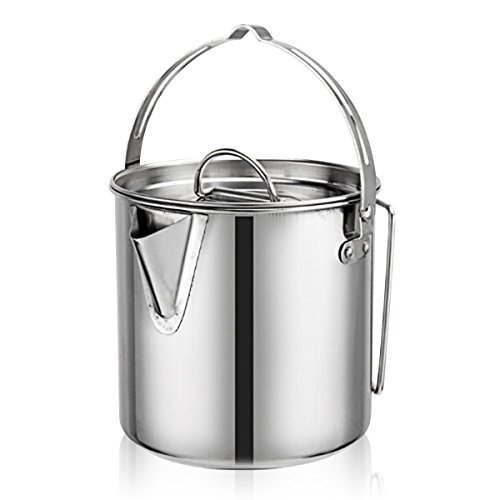 A campfire or stove kettle with a folding handle. As with all of these stainless steel handle models, watch your fingers! Holds 1.2l. 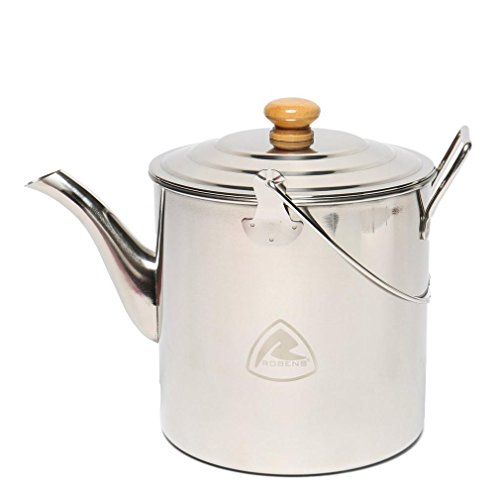 This Robens kettle will work on a gas stove but can also hang over a campfire. You’ll need a glove to protect your hands, but the second handle makes for safe pouring. Plus it holds three litres 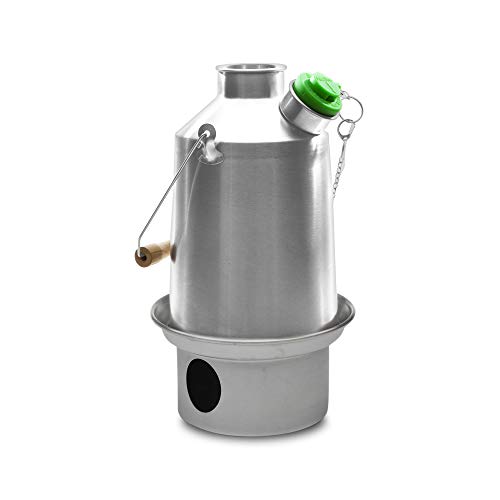 Basically, the Kelly is an easily packable and carryable wood-fired kettle that needs just a handful of fuel (sticks, pine cones, birch bark, dry grass) to boil water in just three to five minutes. There’s a range of aluminium or steel, a choice of sizes and lots of accessories to turn the kettle base into a mini cooker.

We loved the simplicity and the fun of using the kettle, but weren’t so bowled over by the cooking kits. That’s perhaps because these are really aimed at adventurers and wilderness campers rather than anyone wanting to cook a full meal.

Brothers Patrick and Seamus Kelly, the current directors of the West of Ireland company, are the fourth generation of the family to be associated with their famous kettle and camping gear. A great pedigree! 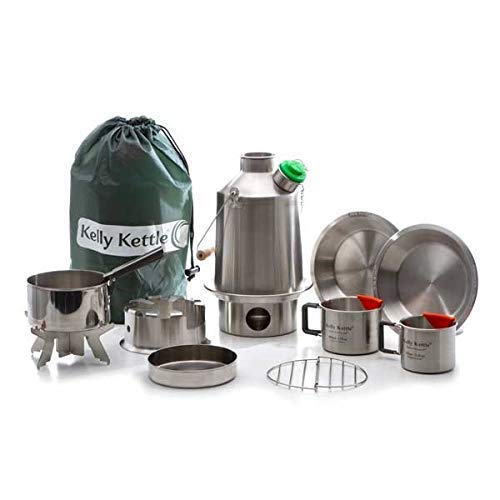 Get yourself a woodburning stove and then add the brilliant water heater (aka BIG kettle with tap) that fits around the chimney. It heats up while you warm your toes and cook your dinner. Not for backpackers and not if you’re on a budget, but rather wonderful. 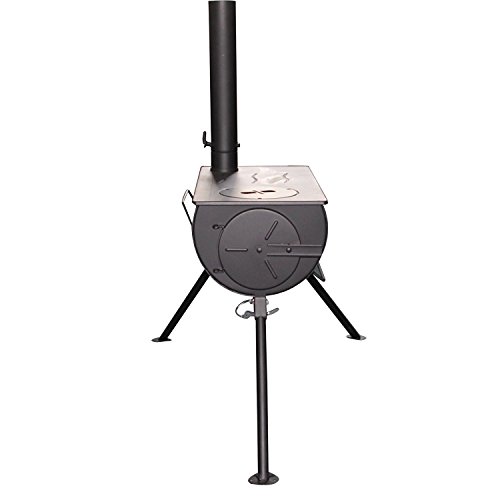 You can read all about these and more in our article on woodburning stoves.

Oh, and the ideal vacuum flask?

We’ve been on a mission to replace our trusty Thermos flask with something gorgeous. Our old one worked well (with a bit of a dribble), but was starting to smell of old ashtrays.

We tried the swanky Thermos Ultimate flask and were a little sceptical about its pushbutton top (though lots of people love it). It looks quite space age and has a nice silicone grip, plus removable antislip base. It comes with a five-year guarantee.

Next up was the Isosteel 0.9l (five-year guarantee too). It’s as minimal as you can get. Just a stainless flask with a screw top and a small cup.

After six hours, the water was still hot enough to make a cup of tea. After 18 hours, drinks were still enjoyable. 24 hours later (and with the flask now nearly empty and having been opened four times), the contents were tepid but still just about drinkable. Nothing to choose between them in terms of keeping the heat in, so it’s a toss-up between swank and minimalism!

Also consider the one-litre Isosteel Duo insulated flask, which has a handle and two cups.

Aluminium can accumulate in your brain, lungs, bones, and other tissues, causing tangles in nerve fibres and leading to muscular dysfunction and memory loss.

Aluminium HASN’T been shown to be a cause of Alzheimer’s disease, but increased levels of aluminium in the brain have been noted in autopsies of Alzheimer’s patients which suggests that aluminium toxicity may be a risk factor in the disease.

Go for anodised or coated aluminium is a better bet, but don’t keep it so long that the coating degrades.

Non-stick pans have a coating of polytetrafluoroethylene (PTFE), which can release harmful and carcinogenic gases at temperatures over 260C. In humans, these fumes can cause flu-like symptoms. The gases are so toxic they are fatal for most birds.

Use enamelled cast iron or stainless steel instead.