Is there anything better than a bit of retail therapy? It can certainly take away the blues on a rainy day when you can’t get outdoors, not to mention the thrill of finding a hidden gem.

One of the great things about the UK is that it is littered with some incredible shopping centres. If you’re travelling around the country and fancy stopping off to spend a few pennies then you’ll be spoiled for choice.

However, if you truly want options then choosing a shopping centre with a whole host of retail outlets, boutiques and places to eat is a must. In this guide, we cover some of the UK’s largest indoor shopping centres where you’re sure to find something that takes your fancy! 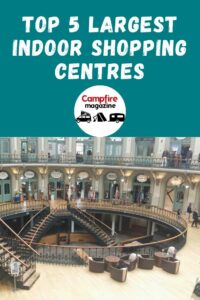 A Bit About UK Shopping Centres

The reality is that the latter was the founding shopping centre having first been built in 1964 while Brent Cross didn’t make an appearance until some ten years later. In any case, both have been revamped and improved over the years making them two of the most popular retail locations in the country.

After the Bullring was built, the UK began to notice the need for indoor shopping centres where shops could be brought together in one convenient location. Before this, you’d have had to have relied on town centres and high streets and not every type of shop was available. These indoor centres were the beginning of modern retail and today, many of us could not live without them. 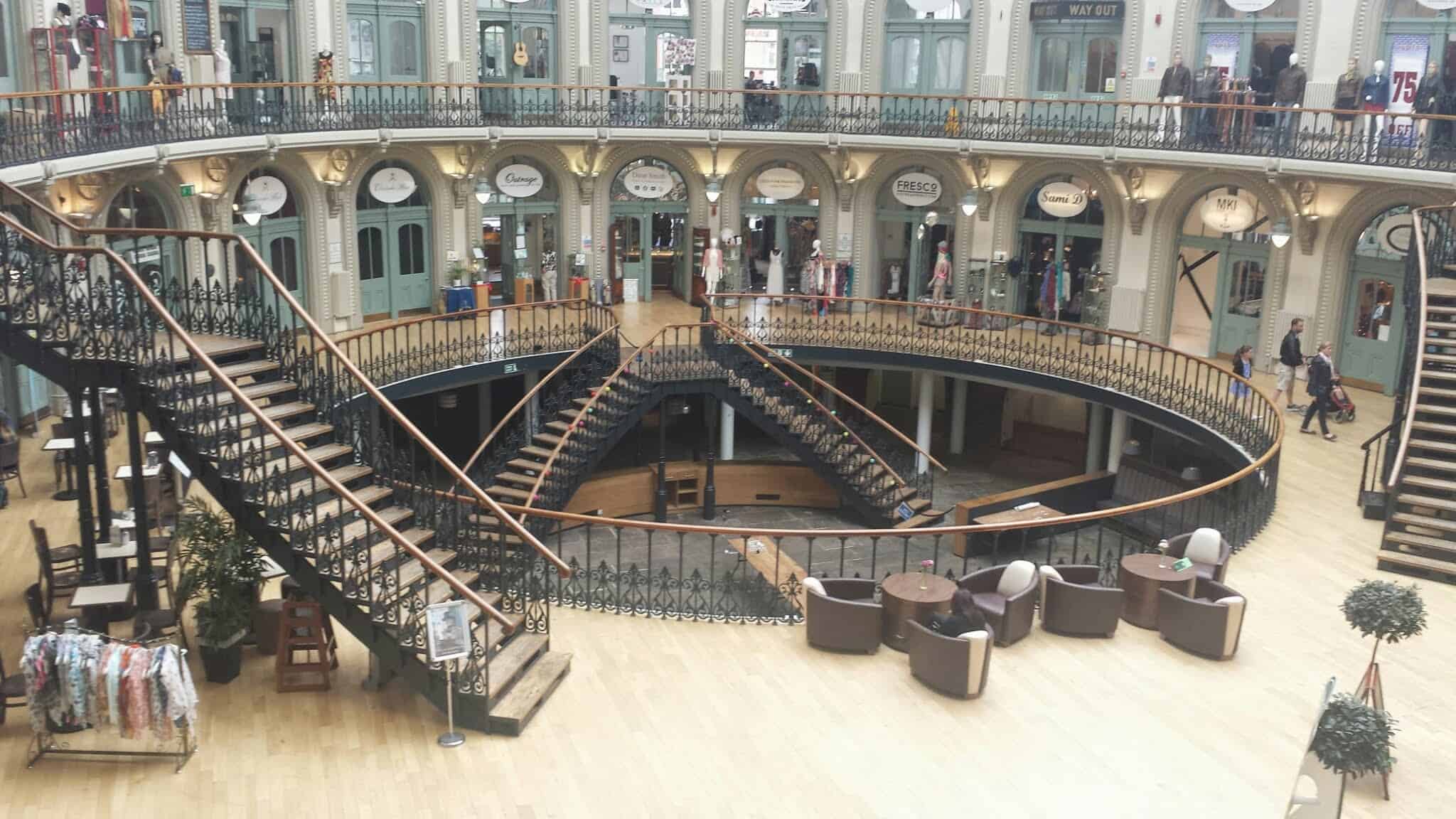 The Lovely Corn Exchange in Leeds

Let’s count down from five to one as we explore the UK’s biggest and most extravagant indoor shopping centres.

Westfield is a shopping centre chain that has locations dotted around the United Kingdom but the centre in Shepherds Bush, London is one of the biggest. It’s located near to the Hilton Kensington hotel and boasts a massive 150,000m² filled with shopping heaven.

There are 270 retail units available here at this prime shopping location which are placed across five floors. What’s special about Westfield London is the number of luxury shops like Gucci, Tiffany & Co and Versace. It’s not often you see brands like this alongside high street companies like HMV, House of Fraser and River Island so there’s an excellent blend to cater to all tastes and budgets.

Merry Hill in The West Midlands

Nestled in the heart of the West Midlands is the Merry Hill shopping centre which is renowned locally for its diverse range of stores and places to eat. Here’s where you will find some of the biggest names on the high street from Primark to Marks and Spencer, Next, Topshop, Disney and Boots among hundreds of others. And when we say hundreds, we really do mean it since Merry Hill is home to more than 300 retail outlets!

You’ll also find an amazing array of restaurants and fast food stops here spread across the 154,000 square metres of floor space. It was at Merry Hill that the very first drive-thru McDonalds came to the UK showing that, along with the pioneering influence of the Bullring, shopping and dining out was a big thing for the midlands.

While there are some excellent public transport links to Merry HIll, you will also find more than 10,000 parking spaces as well as access to the marina where you can enjoy a bite to eat or simply watch the world go by.

When you think of famous UK indoor shopping centres Bluewater in Kent might be one of the first places that springs to mind. It’s a name that is known throughout the UK and covers a whopping 167,000 square metres. In terms of the number of shops, Bluewater boasts around 330, three of which are anchor stores including the well-loved John Lewis.

One of the greatest things about Bluewater is that it is considered to be one of the safest and well regulated shopping centres in the country. While some found the new rules imposed in 2005 to be a little much, many welcomed them with open arms. At Bluewater, the code of conduct dictates that you must not attend in large groups with no intention of shopping, you cannot wear clothing over the face and bad language will not be tolerated. This was implemented to deter young groups from loitering and treating the centre as a hangout.

When it was initially built, Bluewater was the biggest UK indoor shopping centre and while it has currently been taken over by some larger centres, new planning permissions for extension could see it back at the top.

Manchester is known for a lot of things and one of them is the Trafford Centre. It is not uncommon for groups from all over the UK to make a special trip to this northern city with the sole intention of shopping here. 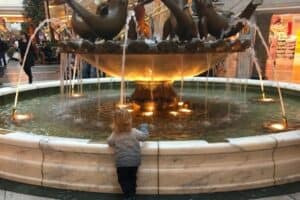 Our little one enjoying the Trafford Centre Fountain

The Trafford Centre is one of the younger shopping centres in the UK having only been built in the late 1990s. Planning took some serious graft and this meant that the completion of the building took much longer than anticipated. But it was certainly worth the wait with more than 177,00m² of pure shopping luxury including anchor stores like Selfridges.

One of the biggest attractions of the Trafford Centre is its enormous food court which is the largest in the UK. Moreover, the shopping centre is home to more attractions such as a large cinema. Combine this with the shopping and Manchester’s finest shopping centre attracts more than 30 millions guests every year! There is also an awesome Lego discovery centre there. 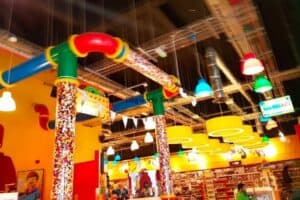 Gateshead in the North East of England is primarily known for its huge looming statue, the Angel of the North but what a lot of people don’t realise is that this city is also home to the largest indoor shopping mall in the country! 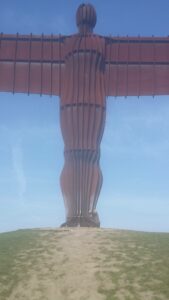 You can just see me hugging the Angel!

Way back in 1986, the Metrocentre first opened its doors and not only is it the largest in the UK, it’s also bigger than any other indoor retail space on the continent! If you want a true shopping experience, this is the place to be.

The Metrocentre boasts more than 190,000 square metres of shopping space with as many as 340 stores to be discovered. There’s a smaller retail park now attached to the main shopping centre giving visitors even more choice.

What many people find attractive about the Metrocentre is that it is broken up into themed areas so it’s super easy to find what you’re looking for, despite the large size. You’ll find all of the main UK high street brands here as well as bowling and a cinema. Great for a day out! And if you’re feeling spiritual, the shopping centre even has its very own chaplain thanks to a significant chunk of the financing being donated by the Church.

We have fond memories of MetroLand, a £20million theme park which opened in February 1988, which at the time was Europe's largest indoor amusement park, with an indoor rollercoaster. Unfortunately it closed in 2018.

The UK is famed for a lot of things but shopping isn’t always the first thing that comes to mind. Great architecture, royal palaces, sports and literature but retail therapy is usually the pride of Paris, New York and Milan. But there are some amazing places to get your spend on in the UK and some of the shopping centres are beyond your wildest dreams.  Honorable mentions go to Meadowhall near Sheffield, which we feel has slightly gone done hill but it is still the best within easy reach of South Yorkshire.

What’s more, the UK is home to the largest shopping centre in Europe so there’s nowhere better to spend those pennies and treat yourself to that something special you’ve had your eye on for a while!