When it comes to choosing a tent for your camping trip, there are certainly a lot of options. But if you’re looking for something much simpler than some of the high end modern tents, then there is one type of tent that will suit your needs above all others; the pup tent.

The name might have you believe that this is nothing more than an outdoor shelter for your canine friend. But that’s certainly not the case. 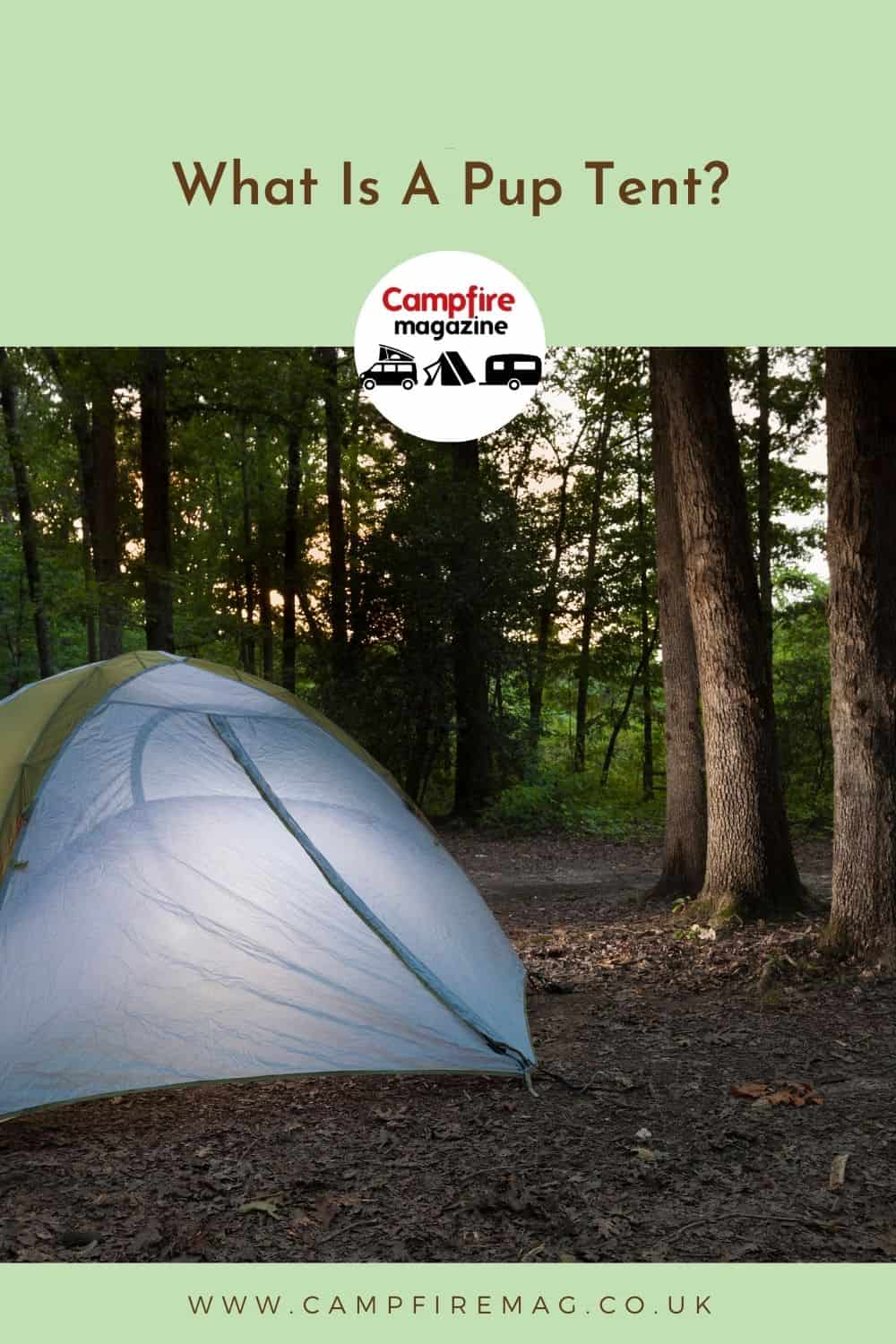 In this article, we will be giving you a brief history of the pup tent and showing you what a wonderful piece of equipment it is.

Table of Contents
Where Did The Name Pup Tent Come From?
So, What Exactly Is A Pup Tent?
Where Did Pup Tents Come From?
Can I Buy A Pup Tent For My Camping Trip?
Conclusion

Where Did The Name Pup Tent Come From?

It sounds a little strange when you first hear it and the name pup tent really doesn’t give a lot away. But there is an interesting story as to how these simple tents earned their name and it dates back to the American civil war.

Back then, the soldiers would use canine terms to talk about their gear. Where do you think the name dog tag came from? As well as other items, tents were one of the things that got referred to by these terms and there were even some parts of the military that called their tents dog houses. There is also some suggestion that many soldiers considered these tents as more suitable for a dog than for humans as they lacked a floor and any kind of protection from ground water or floods. As these terms developed, it soon became pup tents and this name has stuck ever since.

The reason that these pup tents were so popular during the civil war was because of how lightweight they were. The military men had to walk very long distances and they couldn’t afford to lose any more energy than they needed to by carrying cumbersome tents. These shelters were made from materials that were super easy to transport and it wasn’t long before the tents were considered an essential item for soldiers.

So, What Exactly Is A Pup Tent?

So, we know where the name pup tent comes from but what are these tents? Well, a pup tent is much smaller than other types of tent and it’s perhaps the kind of thing you would cook up in your imagination when thinking about wild camping. I once watched an episode of Peanuts where Charlie Brown and Snoopy went on a camping trip and this type of tent was exactly what they used. Now, every time I think of a pup tent, that image invades my mind.

Pup tents aren’t much taller than about three and a half feet and they’re only around seven feet long and five feet wide. Just enough room to accommodate one person; two if you want things to be really cosy.

When they were first invented, pup tents were not very protective. They had no waterproof features so if you were camping in the rain, you’d know about it! The ones you can buy today are far more advanced, and some might even say luxurious in comparison to their older counterparts.

One of the great advantages of the pup tent is how easy it is to erect. Some of the large, modern tents are made up from several rooms and are incredibly complicated to put up, often taking hours to complete. On the flip side, a pup tent can be put up with minimal effort and they’re very lightweight. This makes them perfect for things like hiking and short breaks.

CHECK OUT OUR WILD CAMPING GUIDE

Where Did Pup Tents Come From?

As we have already discovered, the first pup tents can be dated back to the American civil war. Soldiers during this time needed a shelter that they could easily move around without the need for horses or other modes of transport.

As a result of this, they needed to come up with something innovative that offered ease of use and a half decent shelter. While the very first pup tents were extremely simple by design, they have shifted and altered over the years to become what we know today. Let’s take a look at how they have changed.

The civil war tents were the most basic of all. They consisted of nothing more than a simple frame and a cover. There weren’t even any doors and you entered and exited the tent through either of the open ends. That allowed for easy access but it certainly didn’t keep out the wind and rain. Moreover, the primitive pup tent materials were just as basic as the design so offer very little in the way of protection.

However, moving on through time and heading into World War II, we started to see some developments for the pup tent and things began to look up a little. Back in the civil war, soldiers would have to use things like branches and even their weapons as a frame for their tents. But in the Second World War, pup tents started being made with frames.

The colour of the tents was also changed with the most common being dark green. This made them much easier to conceal in the landscape. But what made the biggest difference to World War II soldiers was that the tent material saw significant improvement. This meant that they were no longer as exposed to the elements and could stay somewhat dry and comfortable.

Soldiers continued using these pup tents but depending on the conditions in which they found themselves, it was sometimes a little more tricky to use them. For example, during the Vietnam War, soldiers found that the tropical weather meant a need to make changes to the tent design. One of the ways that they improved the comfort and functionality of the pup tent was to create an A frame.

Not only did this improve the comfort of the tent but it also made pup tents a little more spacious. Soldiers also needed to make sure that the tropical wildlife didn’t cause them any problems so pup tents from the Vietnam War usually featured mosquito nets as well.

Can I Buy A Pup Tent For My Camping Trip?

It’s easy to see that, over the years, pup tents have evolved to suit the needs of whoever was using them. Today, there are several pup tents available from manufacturers that are a little more advanced than the ones that some of the early soldiers would have used.

The great thing about modern pup tents is that they’re incredibly durable so are perfect for off road, rugged adventures. Moreover, they have a lightweight design that means they’re ideal for hiking and other outdoor pursuits that involve a lot of moving about. They’re far from just being a military essential these days!

While the pup tent is considered to be one of the more basic types of outdoor accommodation, modern versions have a range of features that make them much more comfortable for today’s adventurer. For example, they are waterproof so you won’t face any problems with ground water and rain like those using early pup tents would have.

Furthermore, modern pup tents are kitted out with basics like a floor and mozzie nets to keep those pests at bay. So if you’re headed on an exciting expedition and want a convenient and lightweight shelter, you’ve got plenty of options to choose from.

A pup tent is a simple type of tent that goes back as far as the American Civil war when soldiers needed a lightweight and convenient shelter. Back then, these tents were about as basic as it got but over the years, changes have been made to suit the modern camper.