Camping and foraging for mushrooms go perfectly together – providing you take NO risks.

On our quick trip to Shropshire this month, Shirley helped us spot and gather delicious field mushrooms. 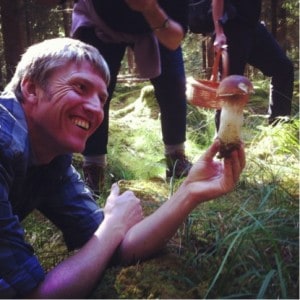 When it comes to harvesting mushrooms from the wild, everyone knows about the risks of picking poisonous and potentially deadly mushrooms. So where to start?

Well, it’s worth knowing that the majority of deadly species in the UK are mycorrhizal, meaning they grow in symbiosis with tree species. So, the theory goes that if you find a mushroom in a meadow and there are no trees within 50 metres (mycorrhizal fruitings of mushrooms can happen quite a distance from the host tree), then the mushroom won’t kill you.

But…it’s not a foolproof system, so read on…

As we said, all good in theory, but there is a potentially deadly species – the Fool’s Funnel (Clitocybe rivulosa) – which grows in grassland in fairy rings. 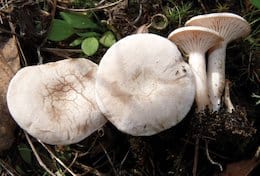 There are many more species that can cause poisoning ranging from indigestion through to severe gastric distress, shivers, sweats, palpitations, and hallucinations. Not good.

Also, some people are just allergic. Poor Shirl (pictured at the top). She helped us pick and cook but couldn’t eat the delicious result!

Now, this is the point where most people decide to put the mushroom ID books back on the shelf and give up this crazy pursuit in favour of something much safer – like skydiving. But I implore you to think again.

The key to safe mushroom-hunting is to get to know the easy-to-identify edible species first of all, and stick with eating these species initially.

As you gain more experience in the field and start to be able to recognise some of the poisonous species, you may feel confident enough to extend the range of wild mushrooms you sample. It goes without saying, though, that you must NEVER eat a wild mushroom you haven’t identified with absolute certainty.

Risks aside, the thrill of mushroom-hunting is hard to beat and can end up being rather addictive. And, after the joy of the forage, there is often some excellent eating to be had too. Here’s a list of some of the most common, and easy-to-identify species, that are well worth keeping your eyes open for: 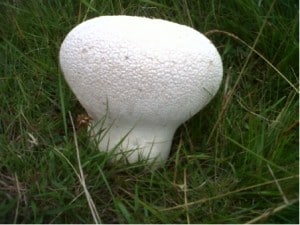 The best species of puffball for eating are also the largest and easiest to identify. The Giant Puffball (Langermannia gigantea) and the Mosaic Puffball (Calvatia utriformis) grow in grassland, gaining the appearance of a football or even small sheep as they mature.

The Giant Puffball is the largest of the two and can reach over 60cm in diameter. Just one puffball can provide an excellent meal for the family. When cut in half puffballs should be white inside. If they have a yellow/green interior, the spores are reaching maturity and they’re inedible. If they’re purple or black inside, you most likely have the poisonous Earthball, which is found under trees in woodlands.

Puffballs can be breaded and pan-seared in olive oil or bacon fat to make a fabulous breakfast addition. They also make an excellent soup. 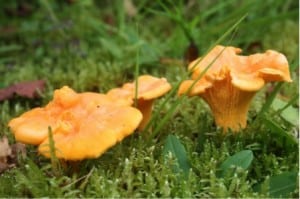 This real gem of a mushroom loves to grow in large swathes in damp native woodlands, especially under beech, birch and pine trees.

The golden yellow of the Chanterelle stands out against the green background of the moss it loves to grow with. The cap is funnel-shaped and firm-fleshed, and gives off a mild aroma of apricots when fresh. It can be mistaken for the inedible (but not poisonous) False Chanterelle, which has softer flesh and is orange in colour rather than golden yellow.

Chanterelles can cause indigestion when raw, but when cooked make for a tasty meal. They are wonderful when slowly sautéed in some olive oil or butter until most of the liquid has reduced, then served with seasoning and a splash of cream.

Chicken of the Woods (Laetiporus) 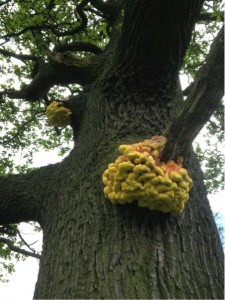 This mushroom is very easy to identify from its large size and bright orange bracket formation. It tends to grow on fallen logs or out of the side of live oak trees, often way out of reach.

Specimens can be as much as 25kg in weight! The flesh is inedible raw. Young specimens, where the colours are still rich oranges and yellows, are good to eat as long as the flesh isn’t too tough. This mushroom can be cubed and added to dishes as you would chicken. One fun and especially tasty way of preparing these wood chickens is to make Chicken-of-the-Woods Nuggets. 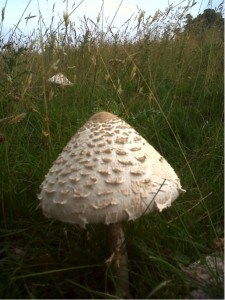 These lofty and delicious mushrooms are found in unmown and unfertilised pastureland and they look like umbrellas or parasols.

The scaly stems can be over a foot tall, and the cap has distinct brown scales all over with a dark central spot. This mushroom has a fabulous flavour and makes the very best mushroom fritters you can imagine. I should add that the stem is generally considered too fibrous to eat, but they can be added to a stock or soup without a problem. 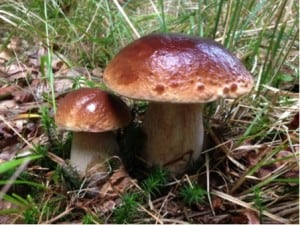 This mushroom is widely revered, and for good reason. When fresh, the flesh is tender, sweet and nutty. Just delicious.

When dried, the flavour becomes deeply aromatic and smoky, making it an excellent ingredient to add to dishes such as lasagne, risotto and soups. The Penny Bun is a member of the Boletus family which includes some other very fine edible species too.

Instead of having gills under their caps, all Boletes have a sponge-like surface which is made up of many hundreds of small tubes packed together. Whilst there are poisonous members of this family, there are some simple rules to guarantee one of these doesn’t end up on your plate by accident.

If there are red markings on the stem or the tubes under the cap, avoid. If the flesh stains a blue colour on handling or on cutting, avoid. And if on nibbling a small piece of the flesh it tastes bitter, avoid. Stick to these rules and you’ll go far and live long in the world of mushroom foraging!

We MUST stress for a second time that you should NEVER eat a wild mushroom unless you’re utterly sure you know what it is.

We can’t take any responsibility for wrong identification. Be careful! Here are some good guides to mushrooms and foraging.

Jesper Launder has been identifying and eating wild mushrooms since childhood when he discovered a fascination for the wonderful colours, shapes and varieties. More than 30 years later, he now leads wild food and mushroom forays for the public, as well as teaching mushroom identification skills courses.

He has worked as a medical herbalist for over 12 years and has a particular interest in the medicinal properties of mushrooms. He’s a member of the British Mycological Society and the National Institute of Medical Herbalists. More info at www.jesperlaunder.com.