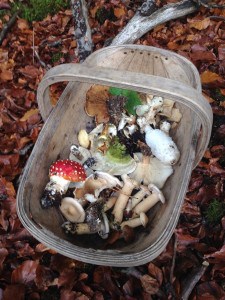 A mix of mushrooms – some edible, some definitely not.

Wild food and foraging combine delicious tastes and a lot of fun. Two of the Campfire Team were lucky enough to spend the day with expert wild foodie Chris Bax and chef Stephen Bulmer, who’s worked with Marco Pierre White and Giorgio Locatelli. Here’s a taste! 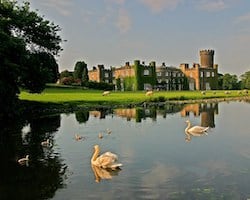 Swinton Park near Masham in North Yorkshire is a grand stately home that’s now a restaurant, hotel and cookery school with acres of deer park, a huge walled kitchen garden, woods and lakes.

First, a two-hour foraging expedition through the estate. 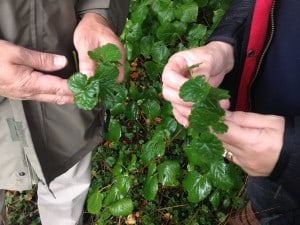 Ground Ivy is one of the commonest plants, flourishing on sunny hedge banks and waste ground in all parts of Britain. It has kidney-shaped, dark green leaves and flowers that open early in April and carry on into the autumn. It’s a salad green and was used in the past for adding a tangy bitter flavour to beer (hence its other name, alehoof). Don’t eat ground ivy if you’re pregnant or breast-feeding, have liver or kidney disease or suffer from epilepsy.

It grows in shady places and has small bright yellow flowers. The leaves are easy to mistake for ground ivy, but dig it up and find a juicy bit of root and it should have a distinct clove smell. Use it as you would cloves. Don’t eat herb bennet if you’re pregnant.

Easy to find as a weed almost everywhere and it tastes like watercress. I loved spotting it amongst the pots at a nursery the next day and being able to surprise everyone with its taste!

This is a member of the aster family. It’s bitter and can be toxic too, but was once used a lot in cooking and medicine 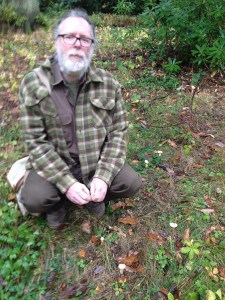 Chris with my trooping funnel find.

Clitocybe geotropa or Trooping Funnel. But if you’re not sure, don’t eat!!

Stephen cooked these delicious mushrooms later with alehoof, shallots, wine and garlic, throwing in our other edible mushroom finds – shaggy inkcap (or lawyer’s wig) and hen of the woods.

We found just the stubs of these growing out of a rotting log. Someone had already been along and taken them. Chris explained how the rich pickings to be had from mushroom gathering means gangs are carpet-bombing woods and taking every kind of fungus (edible and not). Back at the vans, someone who knows their mushrooms simply discards all the duds and keeps the saleable ones. The problem is not so much the damage to the mushrooms, but the trampling of wild places and a clampdown in some places that penalises those who’ve innocently taken a basket or two for their own use each year.

Remember: Don’t pick and eat any mushrooms unless you are ABSOLUTELY sure what they are. Same goes for berries and leaves. 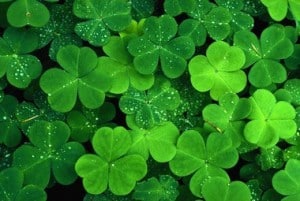 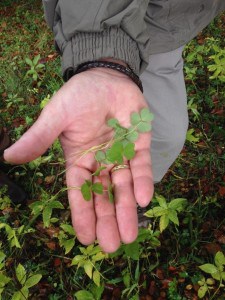 These pretty three-lobed leaves have a lemon-y taste, much better than garden-grown sorrel.

And a miscellany of other finds and tasty discoveries:

Hawthorn and rowan berries – great for jellies and jams or use to make fruit leathers (home-made fruit winders). You can find a recipe here.

Acorns – boiled in two lots of water to get rid of the tannins; ground to flour and used half-and-half with ordinary flour for biscuits. Or try them roasted. 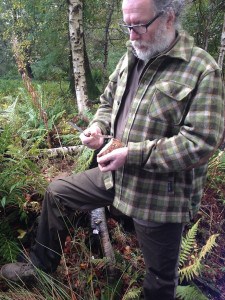 Chris cuts into a birch polypore. This bracket fungus is called razor strop because it was used to hone blades. The amadou layer can be used as tinder (it holds a spark).

Hogweed seeds – smashed and toasted for a nutty Jerusalem artichoke sort of taste.

Dried gorse flowers – the idea of coconut honey scented flowers for a pannacotta was lovely. Sadly, they were rather tasteless.

Wild garlic leaves – use fresh, of course, but dried and crumbled you can use them all year as a condiment. Great as a flavouring added to mashed potatoes. See our feature with wild garlic recipes.

Siberian kiwi (issai) – well not a wild food in Britain, but too good not to mention. These were growing in huge clusters, the size of an acorn, on a climbing plant in the walled garden. Fresh, they taste like a supersweet mini kiwi. Stephen made them into a delicious, sugarless chutney with a little vinegar, lemon verbena and mint. He also has jars of them dried and they’re a zillion tastebuds better than goji berries! 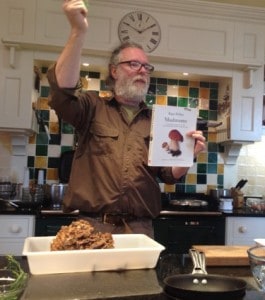 Back in the cookery school, Stephen entertained us with tall-but-true stories while he and his assistants cooked an amazing lunch.

We came away with a month’s worth of valuable chefing tips and tricks – from how to make perfect mashed potato to keeping bread dough in the fridge; from using arrowroot to thicken to how to turn a kitchen into the bridge of the Starship Enterprise…which I suppose needs some explanation. 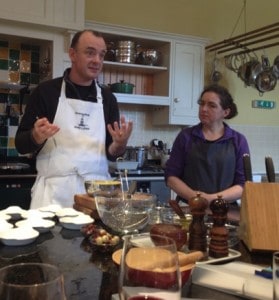 Stephen and Judy create some unusual dishes for us to try.

Stephen was running a workshop and was waiting for one last guest. Impatient to get started, he rang reception and was told that if he waited, it would be “worth his while”! “I didn’t know what that could mean,” said Stephen, “but we waited and then, in walked Captain James T. Kirk.”

William Shatner turned out to be a very good sport indeed. Stephen asked if he’d mind helping the group re-enact a photon torpedo attack on the Enterprise, and soon the kitchen and its equipment were being beamed up into an altogether crazy dimension.

Have a look at our other articles on wild food and foraging. And if you’ve had a great foraging day, tell us what you found!

Want the latest from Campfire Magazine?

Join us for the great news, offers & update