I love to cook. I’ll cook anything. I’m even happy to experiment with new dishes as part of my weekly meal plan. But one thing that grinds my gears more than anything is trying to figure out what things you can put in the oven and what things you can’t. 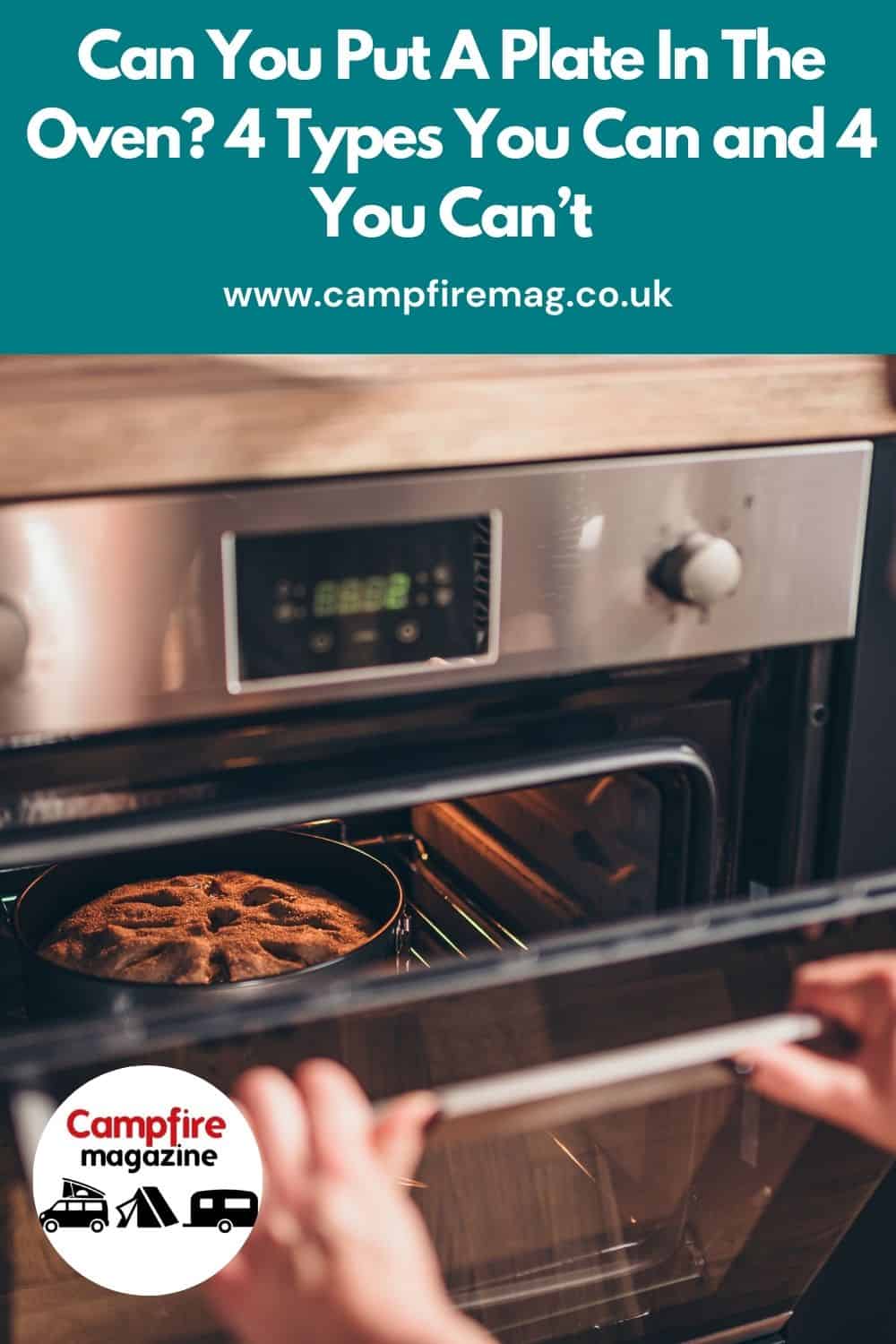 Being in the kitchen in a day and age where there is so much choice in terms of cookware can be a very good thing. On the other hand, it can leave you wondering about the safe use of each item and you’ve got to commit all of that to memory.

If you’re reheating food in the oven, it’ll likely be on a plate. But what plates can go in the oven and which ones should be left well out of the heat? In this guide, I’ve put together some information on four types of plates that you can safely use in the oven and four that you can’t

What Oven Temperature Is Safe For Plates?

Before we dive into the nitty gritty, it’s important to point out that even with plates that can go in the oven, there is a limit. This limit will very much depend on the material from which the plate is made so it’s different in every case.

Generally speaking, you can put a regular plate in the oven at around 120ºC and you won’t have any problems. However, you’ll normally find that the manufacturer will give you more specific information for any given plate.

On the back of the plate, you will see a label and this gives you information on whether it can be used in the oven. There will be other information such as whether the plate is microwave and dishwasher safe. A lot of plates have this information printed on the back rather than a removable label but if this is not the case, it’s probably best to avoid putting it in just to be safe. 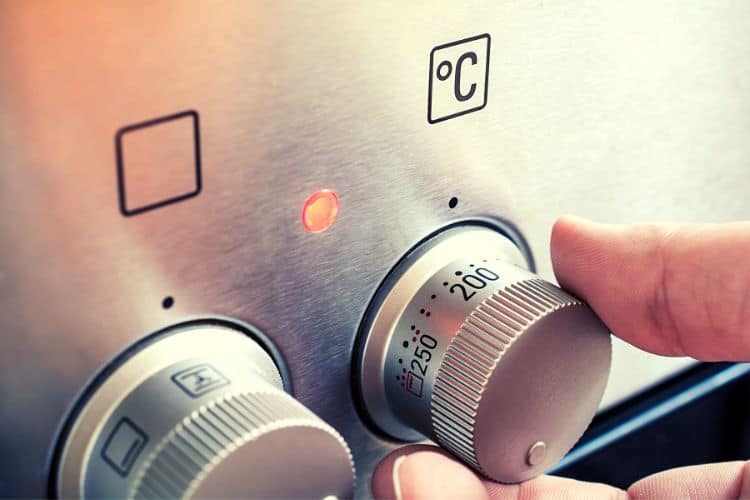 Plates You Can Put In The Oven

Cast iron is a brilliant material for cookware and kitchen items. It’s so incredibly durable and is one of the best materials for handling heat. However, there aren’t a lot of cast iron plates about. Although there are some but they’re usually designed for cooking as opposed to eating off of.

In any case, if you’re using a cast iron plate then go right ahead and put it in the oven. You don’t need to worry about how hot things get in there because this highly resistant material will stand up to the challenge.

However, I should warn you that cast iron can get extremely hot. I’m not talking about something that you touch and you’ll get some minor irritation. I’m talking sizzling hot with a high risk of severe burns. Imagine those sizzling plates you get at a pub! So, if you’re using this type of plate, make sure you protect your hands when removing it from the oven.

There aren’t a huge number of metal dinner plates but there are some, particularly those that are designed for things like camping, as they’re far more durable. You might also have other types of metal kitchenware that you’ll need to put in the oven like a balti dish, for example.

In any case, metal is perfectly safe to put in the oven. Most of your cookware will be made from this; think baking trays, pans and cake tins.

The great thing about metal is that it isn’t prone to thermal shock. At least, not unless the temperature is really extreme. If you were to heat the meat up and then plunge it right into ice water, then you might have a problem. But putting a plate into the oven on a low temperature, isn’t going to cause any damage.

However, you should keep in mind that thinner metal plates may bend and warp when they are exposed to hot temperatures, which is something to keep in mind. Furthermore, much like cast iron, stainless steel plates will get very hot so be careful when you take them out.

If we’re talking about dinner plates then I’d put money on it that at least one of the plates in your collection is made from ceramic. This is one of the most common materials for plates and there’s a good reason for this. It makes the plate versatile.

Not only is it ideal for eating from but since the material has been cooked in a kiln, it’ll stand up to your oven without much of an issue. However, you should keep in mind that these plates are painted after they’ve been in the kiln so any decorative aspects won’t be sealed on and may come off when exposed to heat.

If you aren’t bothered about aesthetics and just want to be able to warm up your food then this won’t be an issue. But you will need to be mindful of thermal shock.

Another very commonly used material for plates is glass. There are two particular types of glass that your plates may be made from. These are Pyrex and Corelle. The latter is probably the most widely used in plate making and the great thing about Corelle is that it’ll stand up to much higher oven temperatures than other materials.

In fact, you won’t really face any issues until the heat exceeds 175ºC. That said, it is worth being careful and if you don’t need to heat things up that much, then stick with a lower temperature.

Pyrex has the advantage of being able to stand up to thermal shock much better than other things. There are some limits as to what you can do with these plates as many can’t go in the microwave so if you’re looking for something versatile, this might not be the right material.

Plates You Can’t Put In The Oven

What’s one thing that almost everyone uses to start a fire? Wood! So why on earth would you want to expose it to high temperatures in the oven? You wouldn’t and I’m pretty sure you don’t need me to tell you that. In any case, let’s just quickly recap why using wood in the oven isn’t a great idea.

Wood will catch on fire in the oven, especially if it is turned up particularly high. There are some wooden plates that are coated for an added layer of protection but unless they specifically say that they’re oven safe, I’d steer well clear of that oven.

I feel as though I’m teaching you to suck eggs here but I promised a list of plates that you can’t put in the oven and that is what I’ll deliver.

Styrofoam is affordable and is great if you’re looking for something you can use temporarily. However, this material will melt very easily, especially in a very hot oven. When this happens, it will give off nasty fumes that not only smell unpleasant but can also be detrimental to your health.

Again, I would hope that you’d use your common sense when it comes to putting paper in the oven. But let’s go over this anyway.

It might not come as a surprise to learn that paper will go up in flames even more easily than wood. What’s more, the temperature doesn’t need to be as high in order for this to happen. So it’s super important never to put any kind of paper, plate or otherwise, in the oven.

Much like styrofoam, plastic will melt if you put it into a hot oven. There’s no getting away from this fact; it will happen. As before, the material will give off a nasty aroma and the fumes aren’t very good for you. Plus, they’ll affect the taste of your food.

You might also consider that when the plastic melts, this could make a real mess in your oven that’s going to be a nightmare to clean. The good news is that plastic plates aren’t commonly used in the kitchen. They’re normally reserved for things like picnics and children’s parties so it’s unlikely you’d ever be faced with the decision of whether or not to put them in the oven. 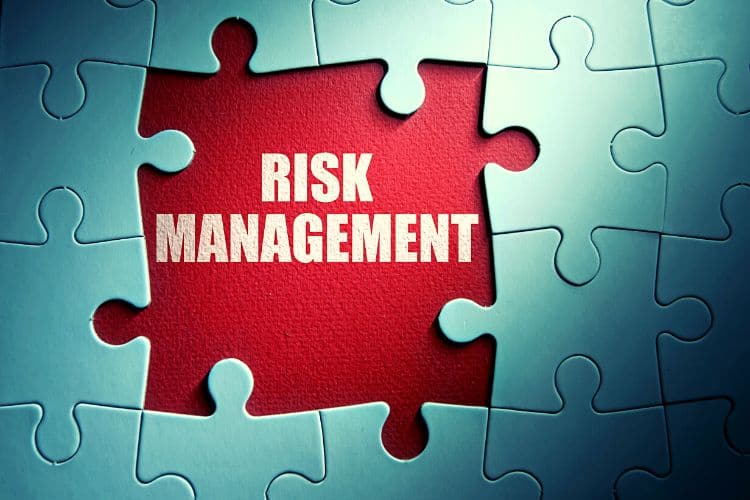 Cooking should be a fun activity. Not one fraught with risks and danger. However, if you put a plate in the oven, there is a chance of something bad happening if that plate is not made from a material that is resistant to heat.

Make sure that, if you’re putting a plate in the oven, it is made from either glass, cast iron, metal or ceramic. These materials won’t melt or set on fire and they handle thermal shock very well.