If you’ve ever tried to get a fire going then you may have thrown on a bit of cardboard for good measure. We’ve all seen how easy it burns so if you leave it in the oven accidentally, you’ll be understandably worried. 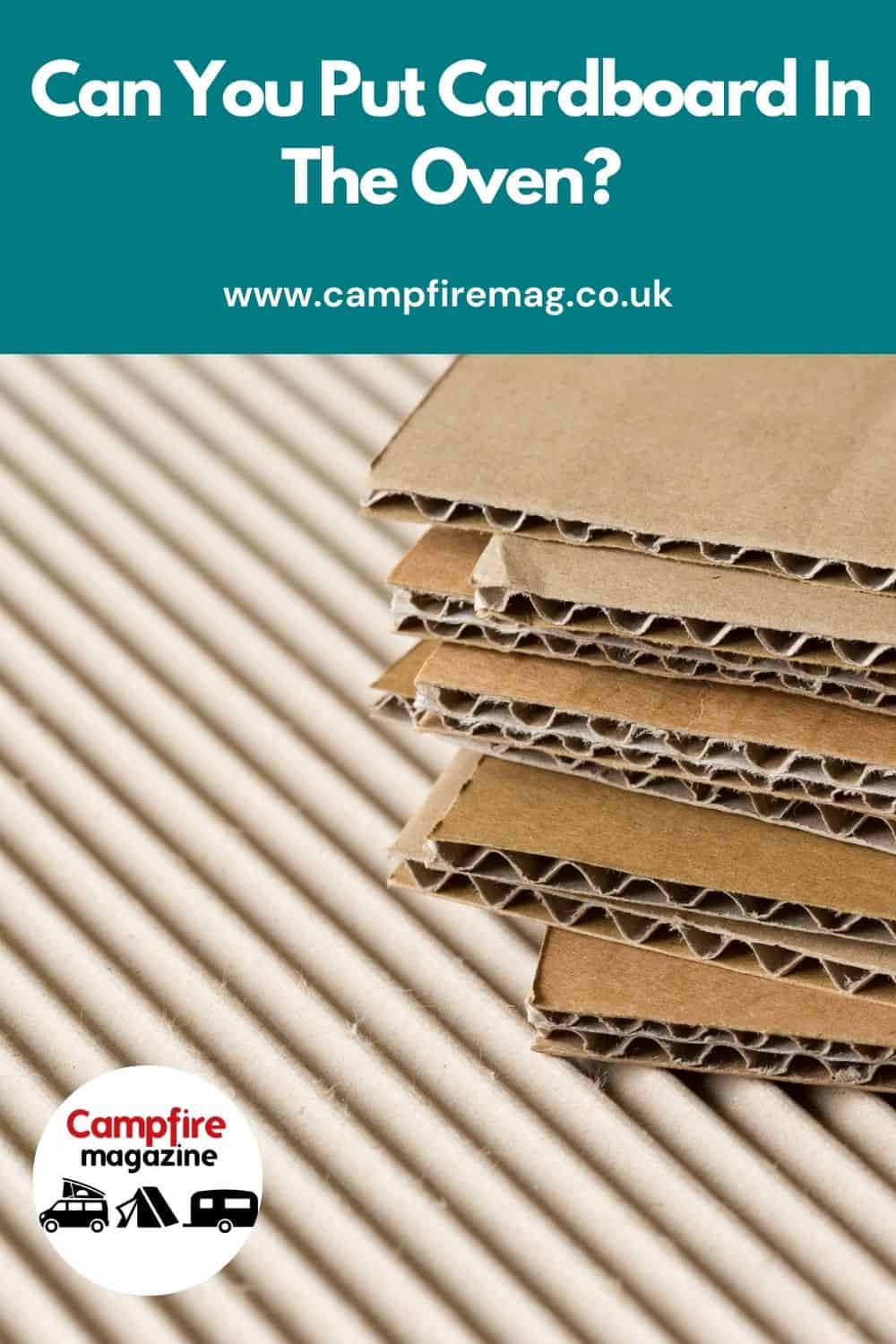 However, it’s all too easily done especially when you consider how much cardboard packaging is used for convenience foods. Things like pizza come with a cardboard base and it’s not difficult to forget about this and put it into the oven along with your food.

But the question remains; can you put cardboard in the oven or is it incredibly dangerous?

Cardboard won’t typically set alight unless it reaches 219ºC. If your oven is below this temperature then it probably won’t result in a fire if you’ve left some cardboard in there.

That said, it’s hardly worth the risk as there’s always a small chance. The problem is that sometimes, we want to put cardboard in the oven to save on washing up. Let’s say you’ve got a cardboard box of chicken nuggets; wouldn’t it be simpler to just pop the whole thing in and save having to clean a baking sheet afterwards?

That’s true, but there are some other things you could use in its place which are much safer. Let’s explore!

Table of Contents
Things To Use Instead Of Cardboard
Cookware
Oven Rack
Tin Foil
Why Can’t You Put Cardboard In The Oven?
Risk of Fire
Slower Cooking Times
It’s Not Very Tasty!
Conclusion

Things To Use Instead Of Cardboard

One of the most common reasons that people end up putting cardboard in the oven is because they are cooking a pizza. A lot of pizzas, particularly fresh ones, come on a cardboard tray but this isn’t designed to go in the oven. It’s there to maintain the structure of the pizza as it goes from the factory to your oven.

Some people just forget about the cardboard and accidentally put it in the oven while others believe that the cardboard will actually aid cooking. This is sadly untrue and something we’ll look at in more detail later on. For now, let’s look at what you can use instead of cardboard.

If you have been using cardboard to cook your pizza because you want to save on washing up then I’m afraid it’s bad news. You will need to dig into that cookware cupboard and choose something suitable.

One of the best things to use is a baking sheet. You can get round ones that are specially designed for pizza or there are other shapes which work just as well. They’re made from metal which is great for ensuring even cooking as well as making sure the base of the pizza is nice and crispy. You can use these sheets for a whole range of convenience foods so it’s handy to have a few in the kitchen.

If a baking sheet isn’t an option then you can use your baking pans or casserole dishes in place of cardboard. While many of these types of cookware might be too small for a pizza, they’re great for other types of foods.

In fact, I’d often recommend these for those premade dishes like casserole or cottage pie that come in a plastic or foil container. These containers are designed to be put into the oven but the contents will often spill over the side so these types of pans are excellent at containing everything, saving you on cleaning your oven.

Going back to pizzas, if you have a bit of a penchant for them then it might be worth investing in a pizza stone. These are often associated with a brick pizza oven but you can just as easily use them in a regular oven. Plus they’re easier to maintain and clean and produce amazing results.

Sometimes, you just don’t want to have to pull out any cookware so you could just place your food directly on the oven rack. Pizza can be cooked this way but I have seen some pretty horrific images of the whole thing sagging or getting stuck to the rack so do this at your own risk.

If you’re worried about your food dripping through the oven rack then tin foil could be a lifesaver! Simply wrap this around the oven rack and pop your food on top. Do make sure that you wrap the rack before you heat the oven to avoid burning yourself.

What’s also great about this method is there is no washing up involved. When you’re done, just take the foil off and throw it away.

Why Can’t You Put Cardboard In The Oven?

OK, so I’ve covered the things you could use instead of cardboard but what’s the reason that I’m so set on not having cardboard in the oven? Truth be told, there are several reasons you’ll want to avoid this so let’s look at these in a little more detail.

One of the most critical reasons that you shouldn’t put cardboard in the oven is because it is a fire risk. I’m pretty sure that not a single one of you reading this will want to deal with a kitchen fire; this is one of the most devastating and dangerous things that could happen to any of us.

When you cook a pizza, you’ll normally need to have the oven at quite a high temperature. The problem with this is that it isn’t usually that far off the combustion point of cardboard which is 219ºC. While the cooking temperature is very slightly lower, it’s not that much lower that you’d want to risk it.

If you put that little piece of cardboard that comes with your pizza into the oven then you might have a stroke of luck and nothing bad happens. On the flip side, there could be a lot of smoke and at worst, the cardboard might ignite. Is it worth it? I really don’t think it is.

That said, it is also worth pointing out that, if you accidentally leave cardboard in the oven then the age of your oven will play a part in whether it sets on fire. Newer ovens are much more safely designed since the heating element is covered so the cardboard won’t be exposed to it. Moreover, they have far better heat distribution so there’s less chance of a fire.

If your oven is older then the heating element may be exposed and this could result in a fire. In any case, it’s best to avoid it altogether. If you suddenly remember that you’ve left the cardboard in, go take it out as soon as possible . 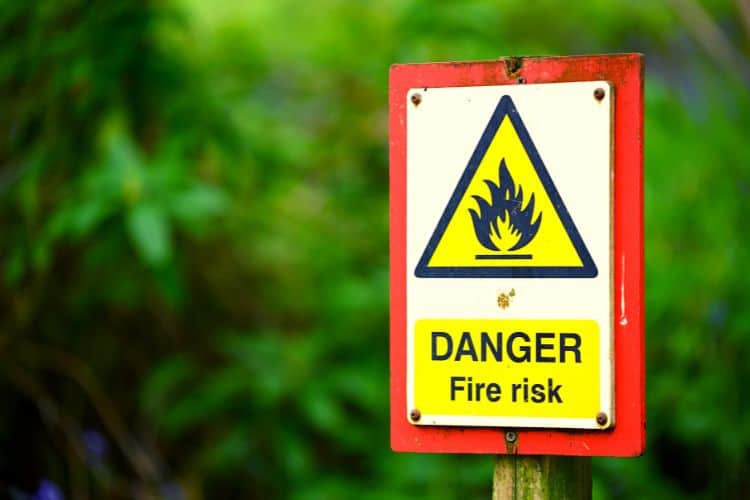 A lot of people think that having the cardboard underneath the pizza will shorten the cooking time but this isn’t the case. In fact, you’re probably increasing the cooking time so you’ll have to wait longer to get that tasty meal.

One of the main problems with this is that the cardboard will prevent the base of the pizza from crisping up. Anyone who loves a good pizza will tell you that there’s nothing worse than a soggy base! What’s more, the pizza won’t cook as evenly so you may find that, while the toppings are done, the inside is still a little doughy.

That saaid, there are some foods, like those that I mentioned earlier that come in packaging designed to go in the oven. Some of these are even made from cardboard. But what you have to remember is that this is cardboard that has been specifically designed for use in the oven. If it hasn’t been then don’t put it in.

Cardboard will smoke when it is exposed to heat. Even if it doesn’t set alight, this smoke will still affect the taste of your food. And it isn’t going to be that nice wood smoked flavour you’d get from a BBQ or pizza oven. No, it’ll be a chemically unpleasant taste that will ultimately ruin your meal.

What’s more, the smoke will leave a nasty aroma in the house and nobody wants that. At this point, I feel it’s also worth pointing out that, while some foods come with plastic that’s intended to go in the oven, putting other plastics in can also spoil the taste of your food and leave behind a very unpleasant odour.

We’ve all done it; you’re putting some food into the oven and are distracted so you forget to remove the cardboard packaging. Now you’re terrified that it’ll burn your oven beyond recognition. Take a breath! Cardboard may set on fire if it’s put into a hot oven but this won’t typically happen until the temperature goes beyond 219ºC.

That said, even below this temperature, the cardboard can start to smoke which will affect the taste of your food. Moreover, the cardboard will prevent your food from cooking properly so it’s important to avoid putting it in or take it out as soon as possible if you suddenly realise you’ve left it in the oven!