While we’re all lusting after those bright and shiny new campervan models, many of them starting in the high £40,000 to £50,000s, glorious weekends are passing by, uncamped.

Do you really need to win the lottery to start carefree campervanning? Sally and Tony say a definitive “no!” 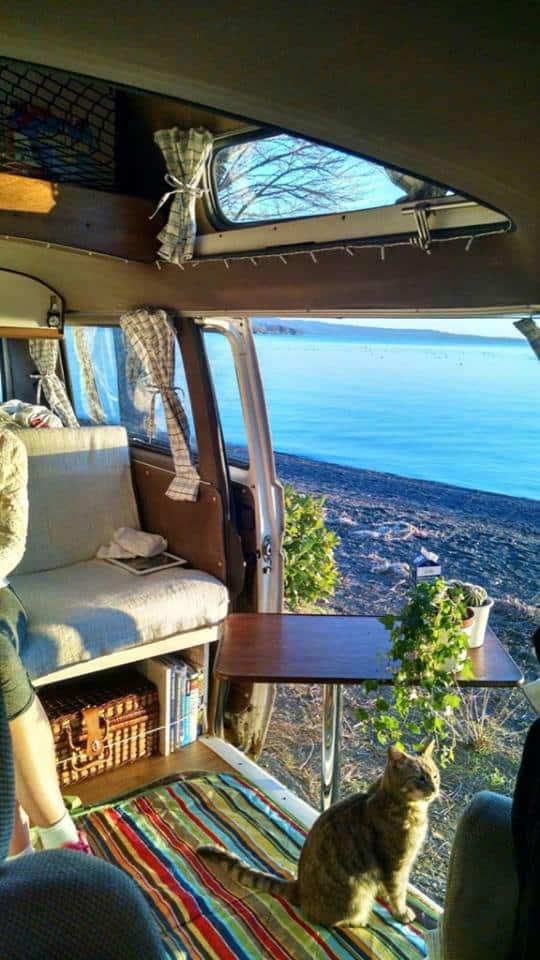 Two part-time campervanners share their workaround for a dual-purpose van that doesn’t cost the earth.

Meet Sally and Tony – campers on a budget 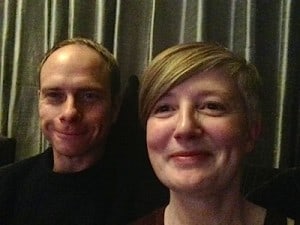 Sally’s a self-employed hairdresser and horticulturalist and Tony’s a decorator…with a van. In this case, a Toyota Hi-Ace with a 2.4l diesel engine.

When Tony bought it for work, it had electric hook-up already installed and shelving down one side. It was crying out to be a campervan at weekends, but Tony and Sally didn’t want to convert it and they didn’t want to spend lots of cash on it.

“We enjoy walking and eating and camping. We’ve camped for the last 20 years and now it’s time for a new adventure in the van,” says Sally. “I have to admit that we’re quite partial to a nice hotel room every now and then too.”

Had they put all their spare money into a campervan, they’d have felt guilty if they decided to do something other than camp. So what next…

On their first trip, they used the seat cushions from their sofa at home, but found they needed a bit more comfort and better use of space. The shelving in the van left just enough room for a three-quarter size removable rock ‘n’ roll bed.

They had theirs made to order at rocknrollbeds in Todmorden for £600, including full upholstery. Sally says they’ll be investing in a memory foam topper to add a bit of ‘give’ to the mattress.

Sally made curtains for the back window and for behind the front seats. They’re strung along wire, which is held by hooks. 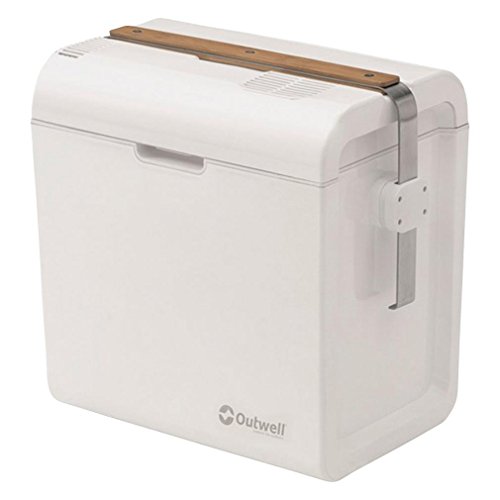 They bought an Outwell ECOCool electric coolbox with 12v and 230 volt option for cooling when travelling and on-site. 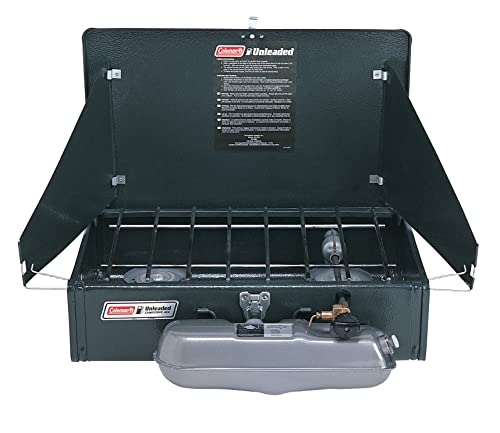 They use a Coleman liquid fuel and unleaded

two-burner stove, rated by The Independent a while ago as one of their top ten camping stoves. (ED: Have a look at the gas stoves we’ve tried and liked as well) 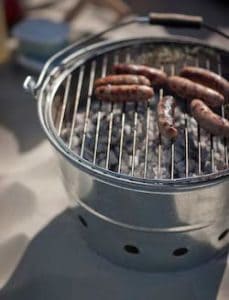 They also took their “trusted bucket barbecue” because it stores away easily.

(ED: See more on wood-burning stoves here, and have a look at our best barbecue guide and  Cobb and Lotus Grill reviews too.)

The shelves down one side of the van have space for food and bedding, and they can easily fit holdalls with their clothes in under the bed. We like the Dakine range of holdalls – choice of sizes and colours, tough, squishable, simple.

Don’t underestimate the usefulness of a Really Useful Box – four of these was enough to turn our old Berlingo into a mini campervan – they acted as both storage and bed-base. 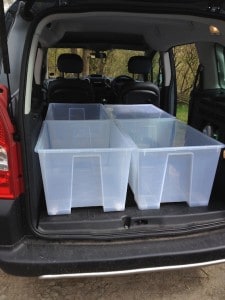 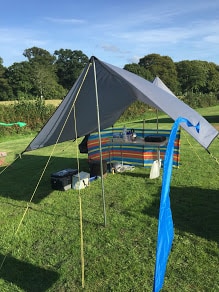 There’s no sink or cooking area in the van, of course. Instead, they use a windbreak and a pitched roof tarpaulin with poles to construct an outdoor space for their table and chairs.

They cook under the tarp as there isn’t height or space in the van. “This is where a pop-up roof would come in handy,” says Sally. “But we’ve always cooked outside and that isn’t a problem…even in gale force winds.

“I think the good thing about keeping a van simple is that sites are now so much more equipped with facilities,” says Sally.

“I wouldn’t want a shower and full cooking and washing-up kit in the van, with gallons of water sloshing about in tanks and all that palaver. Yes I would like a pop top, but I’m really happy with what we have and it can so easily be converted back to the decorator’s van, saving money.”

For lots more info on turning a van, or even a car, into a part-time camper, have a look at our car-camping guide. 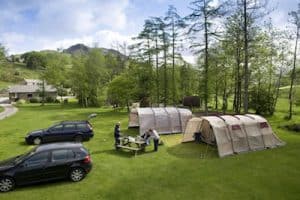 The first trip in the decorator’s van

“Before we embarked on our big road trip to Scotland (more on that coming soon), we tried out our van on a little weekend break at Hollins Farm in Boot, Eskdale. It’s a Camping and Caravanning Club site, though not exclusively.

We turned up in wind and rain and were so glad that we had the van rather than a tent. The manager wasn’t so sure, though. We’ve found that some sites turn their noses up at a van without windows as they don’t believe it’s a camper. It’s worse if you’ve got a signwritten van, so Tony will be getting removable signs for the Toyota. You have to show that the inside is geared up for camping. 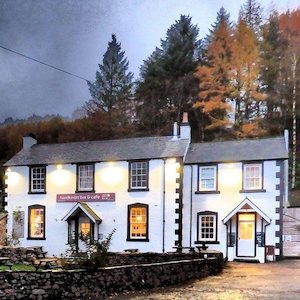 We woke up to beautiful sunshine and made a lovely egg and bacon breakfast on our camping stove in our windbreak and tarpaulin ‘annexe’. That set us up for a stunning walk in the area. There’s also a little train from Boot that takes you down to Ravenglass.

During our walk, we stumbled across the Woolpack Inn on the Hardknott Pass road. What a find! A pint of langoustines cooked in garlic in the wood-fired stove, a rack of succulent ribs and not forgetting the crispy chicken wings. Heaven! We we went back in the evening, as it was only a mile or two up the road.

On our return there, we opted for the wood-fired oven pizzas. They even catered for Tony’s gluten intolerance, and told us they were now cleaning the whole of the work surfaces down to make his pizza. That was impressive and the pizzas were delicious. It was all fresh local produce, and there was a variety of guest ales too.

The walk back seemed a lot further after all that food and drink, but the owner of the pub in his ex-army ‘taxi’ picked us up and dropped us at the camp gates.

The social side of camping

We’d noticed a large group of vans and tents at the site and a lot of cool-looking kids watching the World Cup on a TV on their picnic table. We couldn’t work out what nationality they were. The great thing about camping – and perhaps it’s a reason not to have all your facilities in the van – is that you meet people when you’re showering or washing up. 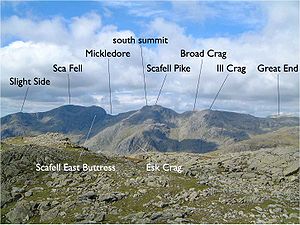 On Sunday morning, after a cosy night in the van, a good breakfast and tunes on the stereo, we met the cool kids washing up and found out they were from Nepal. They were on their way to climb Ben Nevis, having already done Scafell.

All ready for us to leave too and the battery was completely flat because we’d opted not to use hook-up and had been using our battery. The kind warden drove his monster truck over and charged us up.

As we drove past the Nepalese kids, they all stood up and waved us off on our journey home. It brought a tear to our eyes. And so our planning began for Scotland. We were hooked.”

Don't forget about your camping toilet! or should we say caught short?

Have you created a part-time campervan? Do tell us all about it. And…why not subscribe to get an alert whenever we publish a new article?